Home - The Dreams of Miss Cambodia

The Dreams of Miss Cambodia

In an interview with Taing Rinith, 23-year-old Rern Nat, the winner of Miss Cambodia 2017 and the second Cambodian woman to compete in Miss Universe, speaks about her dream of helping the next-generation of Cambodians through a tuition-free English school, which she believes will give Cambodian youth something she wished she had.

Years ago, schoolgirl Rern Nat was asked by her teacher about what she wants to be when she grows up. While her classmates spoke about their dreams of becoming a doctor, a teacher or a policeman, Nat stood up and said, “I want to be Miss Universe”.

Everyone laughed at her, even the teacher. At that time, no one actually expected that the petite dark-brown-eyed girl from Kampong Cham would eventually bear her country’s flag and compete for the crown in the world’s most prestigious international beauty pageant.

Dressed in a stunning Apsara costume and a headdress that bore Cambodian flag and the Angkor Wat, Nat walked gracefully on the Miss Universe stage at IMPACT Arena in Bangkok last month, showing off her natural beauty and the identity of her nation. Her smile exuded confidence and elegance as she was greeted with loud cheers from the audience after Lu Sierra, the commentator, called her name for the National Costume Competition.

As calm and self-assured she may seemed on stage, Nat admitted that one of the major challenges as a Miss Universe candidate was modelling in a bikini. Hailing from a conservative nation where sexy dressing are always met with scorn, Nat was hesitant to show off some skin, not to mention that she had to walk on stage being watched by countless pairs of eyes. But Nat told herself that she had to do it for a country waiting its first Miss Universe crown and that she had to bring honour to the Kingdom and to its people.

On December 17, the final day of the pageant, Nat failed to own the most coveted title. The pageant ended, but Nat believes her lifelong dream didn’t end with it. The pageant, in fact, was just the start of her being Miss Universe – in her own ways, in her own country.

“I have no regrets because it was already a great honour to represent Cambodia and its people in Miss Universe,” Nat tells Good Times2. “This marks just the second time we competed in Miss Universe beauty pageant, and we still lack experience.“I gained considerable experience, and I made friends with fantastic people from all over the world.”

During her time in pageant, Nat got involved in an incident which drew attention from all over the world. In an Instragram Live video posted last month on Miss Colombia Valeria Morales’s account, Miss USA Sarah Rose Summers made a controversial remark about Nat and Miss Vietnam H’Hen Nie’s inability to speak straight English.

After saying H’Hen Nie “pretends to know so much English” and mimicking her smile, Miss USA went on to say that she feels bad for Miss Cambodia, Rern Nat, who “doesn’t speak any English and not a single other person speaks her language”. 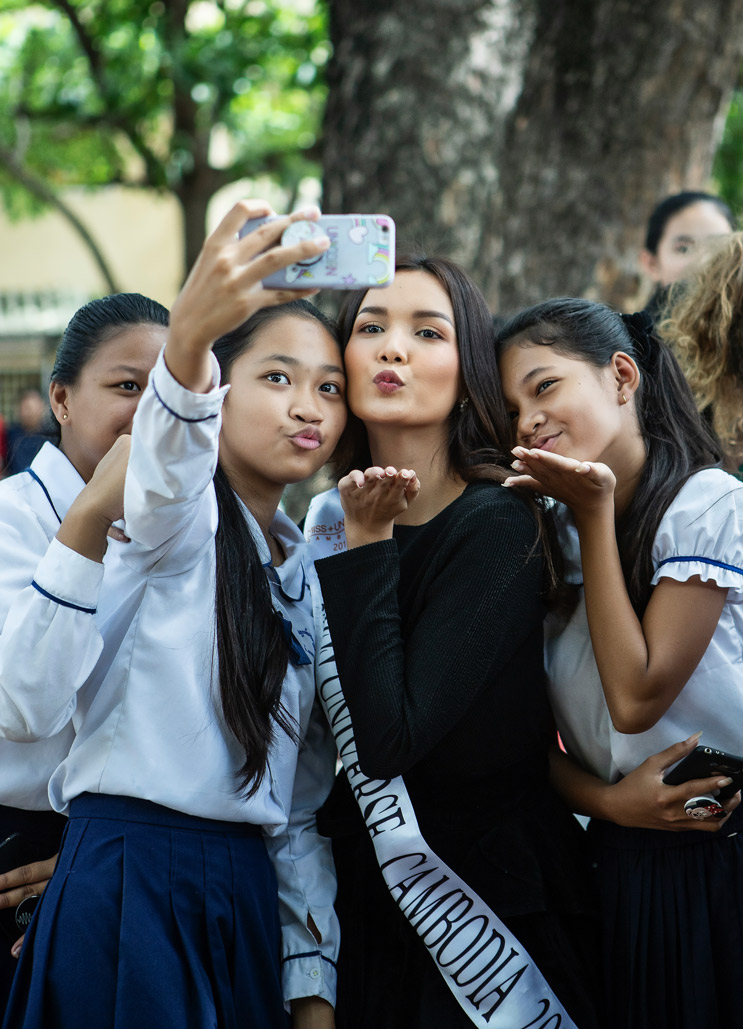 “Can you imagine? Francesca (Miss Australia) said that would be so isolating and I said yes and just confusing all the time,” Summers says in the video. “Poor Cambodia.”The comment drew flak from thousands of Cambodians and pageant fans all over the world on social media. Summers publicly apologised on her Instragram account. When asked about this incident, Nat says Summers’ comment did not affect her as she believes that her fellow candidate was sincerely feeling sorry for her for not having the chance to really talk and bond with other Miss Universe candidates.

“With my poor English, I could not talk much with the other contestants, and I was feeling a bit lonely,” Nat admits. “A translator was assigned to help me, but still it was not easy.

“However, this is a lesson that we need to remember. Those in the next generations who want to compete in the Miss Universe pageant should prepare themselves not just on how to present themselves but also on improving their English speaking skills for a bigger chance of winning.”Growing up in a low-income farming family without a father, Nat did not have plenty of opportunities for education. When she reached junior high school, she started looking for a job to help her mother and support her studies.

“At the age of 14, I was offered a job as a radio host at ABC Cambodia,” she says. “I worked so hard before I could finish high school. In fact, life had always been hard for my family, in which all members are female.”

In 2017, Nat started to follow her childhood dream after seeing an announcement calling for contestants in the newly revived Miss Cambodia pageant. She won the crown and was then selected to officially represent Cambodia in Miss Universe 2018, making her the second Cambodian contestant in the world’s top beauty contest after By Sotheary, who joined Miss Universe in 2017.

Now that she’s back in her home country after an unsuccessful but memorable stint in the international pageant, Nat vows to contribute to her society as much as she can. Apart from training the candidates of the upcoming Miss Cambodia, her other mission is to open a tuition-free English school for Cambodian students.

“I had so little English language lessons because I could not afford to enrol myself in a private class, and it became my weakness in the competition,” she says. “Therefore, I want to provide Cambodian children with something that I never had when I was growing up.”

To open a free school in Cambodia requires substantial funding and resources, but Nat says she is ready to work hard for it and save some of the income she made from a role in a movie and her advertisements. She also says she welcomes contributions from philanthropists for this mission.

At the same time, she is also working to fulfil another goal of becoming a female soldier in the Royal Army of Cambodia and playing a role in the country’s defence force.

“I would not be afraid to go and fight in a war,” Nat says. “Although I am a model, I want to prove that I can do what the men can do, and I want the other Cambodian women to do the same.”

What if no war and genocide in Cambodia?