Bringing the music of Southeast Asia and beyond across the Kingdom

FAB Fest Cambodia. What the heck?! Has someone dipped into the Kool-Aid? How? Why? You may ask, would a disparate group of artists, out of Cambodia and beyond, fall into a kind of road trip, rolling out across Cambodia, that is perhaps more akin to the pranks of American novelist, essayist, and countercultural icon Ken Kesey and his The Grateful Dead  “house band” of the legendary Acid Tests.

Well Grasshopper, Cambodia is, after all, known as “The Kingdom of Wonder” and the travel is often wondrous if not trippy. But more so, the contemporary music and art scene that has emerged out from the shadows of post-war Cambodia makes the Kingdom the perfect place for this FAB kinda happening – a touring arts festival, old timey-revue style – where dozens of individual musicians, artists, writers and latter day counterculture types ride the proverbial bus, going further across Cambodia to be part of FAB.

As curator of this year’s Folk Art & Blues Festival, my mission is to put in some time and effort to create a platform for the kind of art and music that I personally like as well as to bring together a team of kindred spirits, and to “seek out and present the most groovy, raw, primitive, primal, wild and bluesy sounds of Southeast Asia and beyond”. It’s a big statement and even the word Festival sounds BIG as FAB is really meant to be simple, humble and doable but with this year’s line-up, I think we’ve got a great example of the kind of new and emerging music and the energised arts scene that is really flourishing right now in Cambodia and across the region.

Perhaps it’s the exodus from the West by artists seeking greater freedom and adventures into a ‘lesser known’ or the revival of the Wild East’s own counter-culture years… the re-issue of groovy psychedelic rock of the post-colonial Sixties and early Seventies… I’m really not sure why but this year’s Folk Art & Blues line-up is an especially good example of how culture is changing and artists are seeking out places like Cambodia to shape and influence their own work and experience. At the same time, the coming together of like-minded artists also creates a new platform for local artists to stand next to international guests and show just how unique Cambodia’s own voice is. 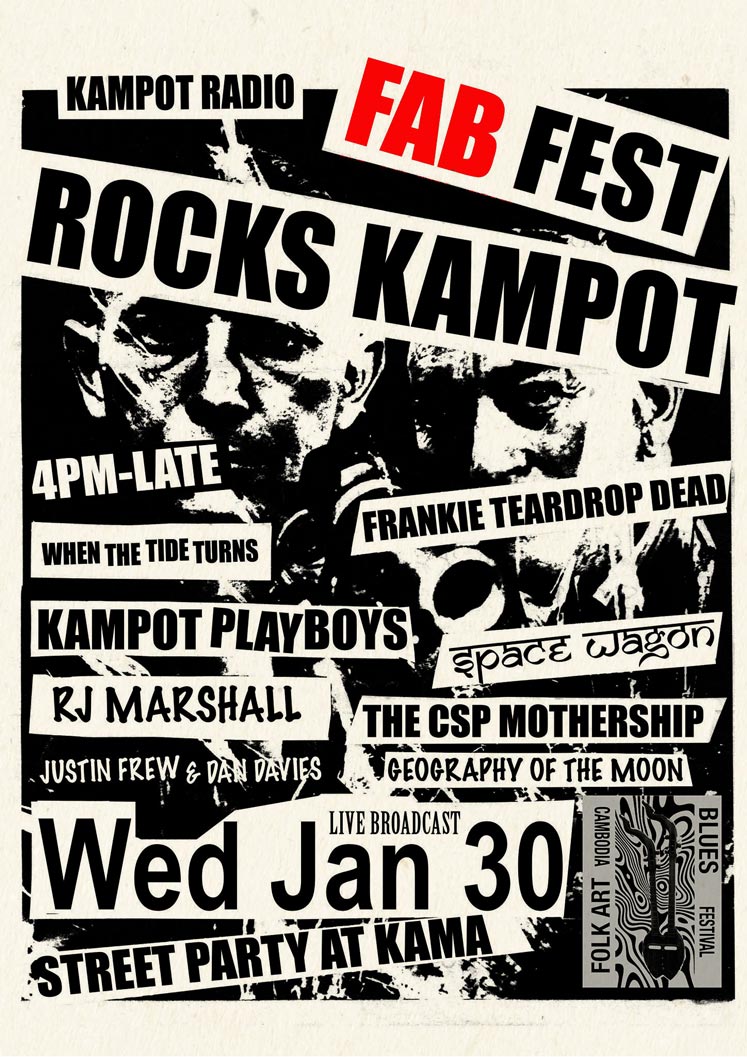 I’m excited to see several bands out of Ho Chi Minh including Skeleton Goode and OPN AIR DRG MKT who both fall under the loose umbrella of Saigon Psychedelic Rock Revivalists. Then there’s the flower-power Peace wagon all the way from London with artists such as the brilliant Frankie Teardrop Dead and Geography of the Moon joining this year’s FAB. Opening night at Chinese House even kicks off complete with a BIG RED double-decker London bus! No… I’m not tripping… the London double-decker will be parked right behind the main stage and function as a bar on opening night…perhaps even doing Kool-Aid cocktails but somehow symbolising this shift by artists out of Western culture capitals such as London, all the way out here to the Kingdom of Wonder… and we’re all still wondering how the bus got here.

Launching on Jan 26 (Australia Day) FAB rolls out as a “touring festival” and will be on the road for 16 days and nights, moving out across the Kingdom with The Cambodian Space Project’s “CSP Mothership” hosting a diverse and eclectic line-up of local and international acts out from UK, USA, Australia, Malaysia, Vietnam plus Cambodian and made-in-Cambodia local heroes The Kampot Playboys, Evil Phnom, Simmer, Vartey Ganiva and Chapei Dong Veng player Kong Boran (son of Master Kong Nay).

In the spirit of Ken Kesey’s Merry Pranksters, the day the launch party, FAB literally starts-a-rolling as “Blues Train Concert” with musicians performing aboard the Sunday afternoon train to Kampot (departs PP 4pm). Courtesy of the Royal Railways, ticket holders and performers will travel together to Kampot where FAB festival happens as a benefit concert for Kampot Radio on Wednesday, January 30th, 4pm to late, coinciding with the anniversary of British Invasion legends The Beatles who performed their last concert ever on the rooftop of the Apple building right on 50 years ago.

From Kampot, it goes on to the City of Temples with a long weekend of FAB shows and events including art exhibitions, film screening and concert. Then it’s onto Battambang with the FAB crew rolling into town for a one-off at one Cambodia’s much loved traveller’s retreat “Here Be Dragons” followed by further bus travel to Phnom Penh and finally, to Mondulkiri where FAB brings to the mountains the first festival of its kind – the only kind of travelling, folk, art, blues, psychedelic rock ’n’ roll festival happening in Cambodia, Southeast Asia or anywhere right now.

FAB 2019 calls in at five cities and travels some 1334 kilometers across Cambodia, bringing something completely new and unique to Cambodia’s emerging contemporary arts scene. It’s a diverse and eclectic line-up and as Louis Armstrong famously said: “All music is folk music. I ain’t never heard a horse sing a song.”

The environmental cost of quenching the world’s thirst