The Environment Ministry yesterday issued a forest fire alert and warned that the Kingdom will see higher temperatures this year due to the El Nino phenomenon.

In a statement, the ministry said that according to weather forecasts by the Water Resources Ministry, El Nino will raise temperatures from 40°C to 42°C.

It said the hot weather could spark forest fires due to some natural and human activities and instructed local authorities to take steps to prevent this.

The statement said that the authorities must advise the public against using fire to harvest forest products, catch animals or create grazing areas and also prevent people from burning forests to clear land or other purposes. It noted that forest fires will spread to nearby homes and infrastructure.

“People must also be careful not to burn waste in or around protected forests,” the statement said. “Local authorities must also prepare contingency plans to fight forest fires to prevent the flames from spreading.”

The ministry said that in case of a serious forest fire, the authorities should immediately alert people living nearby and evacuate wildlife.

“After a forest fire, the authorities must also collaborate with relevant sub-national administrations to prohibit people from inhabiting the cleared areas to allow for regrowth,” it added.

The ministry also reminded people that it is an offence to intentionally cause a fire in a protected area and those caught will be punished according to the law.

It added that it is confident that the public and relevant authorities will heed its warning. 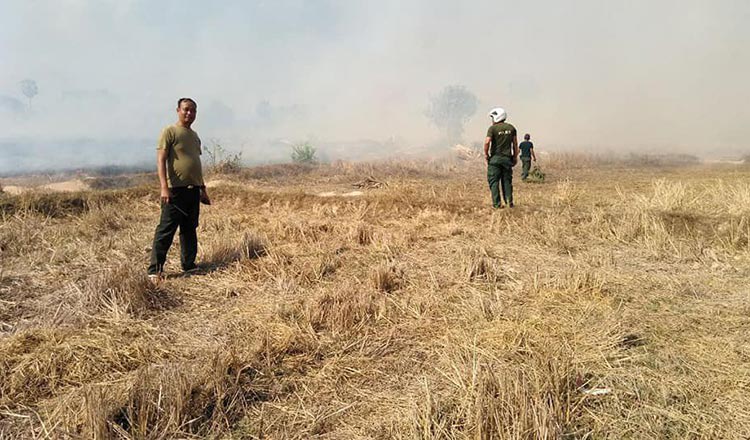 Colonel Nob Sarath, district police chief, yesterday said that children started a small fire in Dam Dek commune, but it flared because of the hot weather and spread rapidly across a rice field.

“Police, the local authority and residents managed to prevent the fire from reaching nearby homes, but it spread to another rice field because of the hot weather,” he said.

“We appeal to residents to stop starting fires because the weather is hot and flames can easily spread and destroy farms, forests and people’s homes,” he added.