Man charged over kidnapping of boy

Phnom Penh Municipal Court yesterday charged a 23-year-old man who allegedly kidnapped a 13-year-old boy and demanded $550 from his father to release him.

A court document identified the accused as Sreng Borey, who is jobless and living in Kampong Chhnang province’s Boribo district.

He was charged with threats accompanied by extortion and faces up to three years in jail if convicted. Mr Borey is now in prison pending trial.

The court said the accused was arrested on Saturday by police from the internal security department at the Interior Ministry following a court warrant issued against him.

Major Keo Savuth, Russey Keo district deputy police chief, yesterday said that at about 12pm on December 20, the accused posed as a motorbike taxi driver and persuaded the Grade 8 student at Russey Keo High School to ride with him.

He said Mr Borey took the boy to a rental room in Sen Sok district’s Phnom Penh Thmey commune and confined him there. 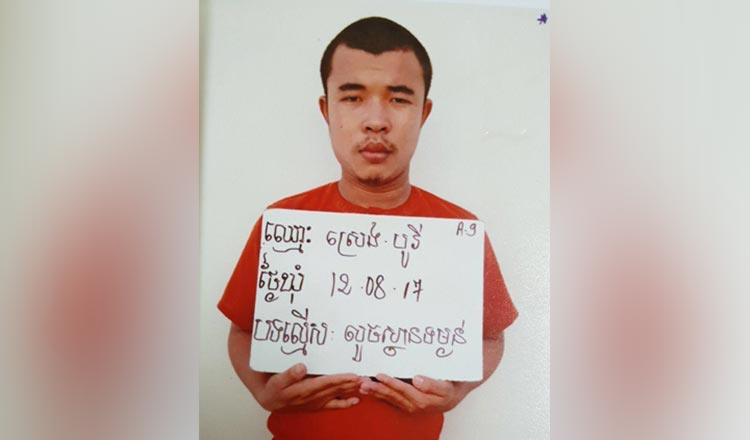 Maj Savuth said that at about 7am on December 21, the accused telephoned the boy’s father in Russey Keo commune and demanded $2,000 from him in exchange for the boy’s release.

“He demanded $2,000 in ransom from the boy’s father,” he said. “He threatened to kill the boy if the father alerted police.”

Maj Savuth said that the boy’s father negotiated for a lower amount and Mr Borey agreed to release the boy for $500, which was sent through Wing Money Transfer.

“But after the accused received the $500 from the father, he did not release the victim and demanded $50 more,” he said. “The father agreed and paid him another $50 through Wing Money Transfer.”

Maj Savuth said that at about 4pm on December 21, the victim was released and took a motorbike taxi home.

He noted that Mr Borey fled from the capital after receiving the ransom money.

Maj Savuth said that after his son came home, the father brought him to the district police office and they filed a complaint.

He added that the accused was arrested on Saturday at his house in Kampong Chhnang province’s Boribo district before being sent to the Interior Ministry for questioning by its internal security police.