According to a joint communique issued yesterday, this year’s meeting in Siem Reap covered building trust for peace, security and sustainable development in the region, and combatting terrorism and transnational crime in the region.

It also covered strengthening parliamentary cooperation and the responsible use of cyber space for social progress.

Other key issues were the Rohingya crisis and peace and security on the Korean peninsula.

“Concerning the situation in the Korean Peninsula, the delegations note positive developments and expressed a desire for a diplomatic resolution of the remaining issues,” the communique said. “Delegates expressed hope that the upcoming meeting between the US and the DPRK will bring concrete results.”

Delegates also urged APPF member countries to foster global and regional cooperation such as the World Trade Organisation, the Regional Comprehensive Economic Partnership, the Belt and Road Initiative, the Asia Pacific Economic Cooperation and the Free Trade Area of the Asia-Pacific.

Members and delegates also discussed the issue of the Rohingya crisis currently unfolding in Myanmar, Bangladesh and other parts of the region.

Chheang Vun, chairman of the Foreign Affairs Commission at the National Assembly, on Tuesday said the Rohingya crisis involves several countries in the region and beyond, including Canada, Indonesia and Malaysia. 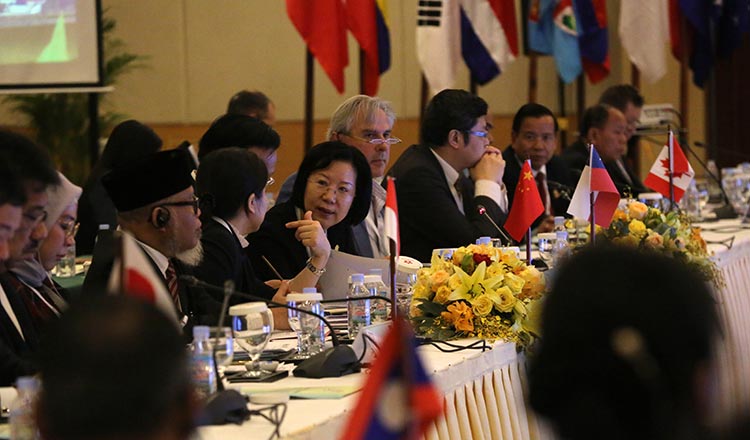 He said that the issue is problematic because Asean member countries vowed not to interfere in each member country’s internal problems.

“The problem with Myanmar is a sensitive problem that began about three to four years ago,” Mr Vun said, noting that the Rohingya crisis was discussed during a meet in Singapore.

“We won’t forget that we are a member country of Asean, so we need to implement Asean policies – which bans external interference,” he said.

During the closing ceremony, National Assembly president Heng Samrin said the three-day meeting was filled with debate and solidarity.

“We strongly supported all initiatives which aim to settle common problems through peaceful means and avoiding military confrontation, especially by boosting the role of parliaments in maintaining peace in the region and the world,” Mr Samrin said. “Peace and stability is indeed as a precondition for national construction and development, and a country can neither enjoy development nor prosperity if it faces war and instability.”

He noted that Australia has assumed the APPF presidency and will host the next meeting in 2020.

“I am confident that Australia will elevate the APPF’s role to new heights in the coming year,” Mr Samrin said.

Kong Korm and son return to politics after royal pardon