More than 2,000 garment workers from Kingmakers (Cambodia) Footwear in Svay Rieng province’s Bavet city yesterday held a protest to demand 50 percent of their monthly wages after the company announced it was suspending work for a month.

Ou Sok Khoeun, a provincial labour department deputy director, yesterday said that the company informed its 2,180 workers and the department that it was suspending operations because it lacked orders from customers.

He said the workers demanded that the company pay them 50 percent of their monthly wages during the suspension period and the employer did not agree, leading to the protest. 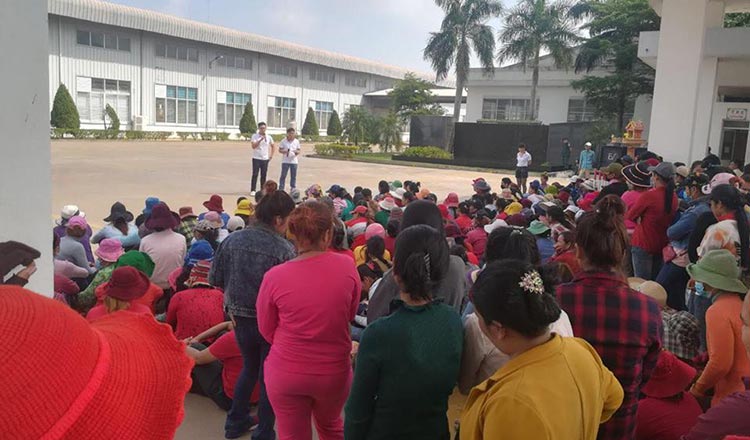 “The company does not have any orders so it decided to suspend operations for a month,” Mr Sok Khoeun said. “We negotiated with the workers and they said they need 50 percent of their wages, but the company did not agree.”

He said that the company instead offered to pay the workers $30 each.

“We will try to negotiate with both sites to find a solution and the workers should stop protesting because it affects public order,” Mr Sok Khoeun said.

He added that the early morning protest was peaceful and the workers went back home in the afternoon to wait for a solution.

“Department officials and police monitored the protest and there was no violence,” Mr Sok Khoeun noted. Lous Seng, Independence Labour Federation Union secretary, yesterday said that during the suspension period, the company should compromise with the workers and provide some money for them to live on.

“Most of them are poor and have taken out bank loans which they need to service every month,” he said. “That is why they are demanding 50 percent of wages to tide them over during the suspension period.”

Mr Seng added that the company should pay the workers at least 50 percent of their wages for them to live on.