Nearly 500 workers at the Bai Hong factory in Svay Rieng province went on strike yesterday after the company fired three representatives who were in the process of forming a union.

Pav Sina, CUMW president, yesterday said that the workers went on strike after the three representatives were fired on January 5 following the workers choosing them to form the union.

He noted that the factory, which produces lighting, is located in the special economic zone in Svay Teab district

Mr Sina said that companies are increasingly discriminating against local union leaders and activists even though the right to form unions and freedom of union is guaranteed by the law.

“Recently there have been many cases of companies firing worker representatives who were trying to form unions according to the law,” he said.

Phon Mesa, a worker who was fired, yesterday said that he and the other two representatives were sacked by the factory owner after organising a vote to select union leaders. 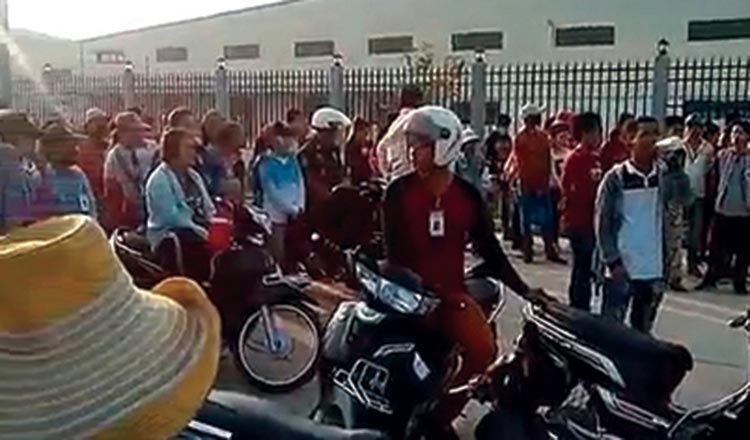 “We just organised a vote to select the union leaders in the company and there was no result yet,” he said. “The company came to know about it and terminated our contracts.”

Mr Mesa said that he suggested to the company to allow him and the other two to return to work.

“We were just creating an in-house union in the company to help the workers when they face problems at work,” he said. “That is why the workers chose us to be their representatives.”

“Our officials went to investigate the case and collect information so that we can help to hold negotiations between the company and worker representatives to find a solution,” he said. “However, we do not have any result yet.”

Last week, the workers of Prestige Garment factory in Kandal province also protested over the sacking of a colleague who tried to form a union. They protested for several days and went to Phnom Penh to petition to the Labour Ministry.

They have since stopped protesting as negotiations continue.