Home - Get ready for Garuda’s Song

Get ready for Garuda’s Song

The Kingdom’s music lovers are in for a rare treat this month with live performances of Garuda’s Song, a musical composition telling the story of Cambodia’s rich musical heritage by tying together traditional melodies with classics from Cambodia’s ‘Golden Age’ of soul, jazz, and rock ‘n’ roll, a period that lasted from 1959 to 1975 and hailed as one of the world’s profound musical renaissances before being brutally terminated by the Khmer Rouge.The work comprises of piano pieces played by the composers interspersed with performances by Cambodian artistes and collaborators, Hong Samley, So Savoeun, and Sinn Sethakol.

Two Americans – Alex Biniaz-Harris and Ambrose Soehn – composed the work, which follows a similar musical composition, Melodies of Auschwitz, which was performed in January 2015 at the 70th-anniversary commemoration of Auschwitz’s liberation in Krakow, Poland.

“Ambrose and I use music to tell stories of underrepresented communities and educate the world about the horrors of genocide. Learning about Cambodia’s Golden Age of soul, jazz, and rock ‘n’ roll prompted us to research further and uncover stories of the Cambodian genocide.

“What was particularly fascinating about the Cambodian genocide was that, unlike others, it was primarily classist, not racially or ethnically driven like the Holocaust or Rwandan genocide. 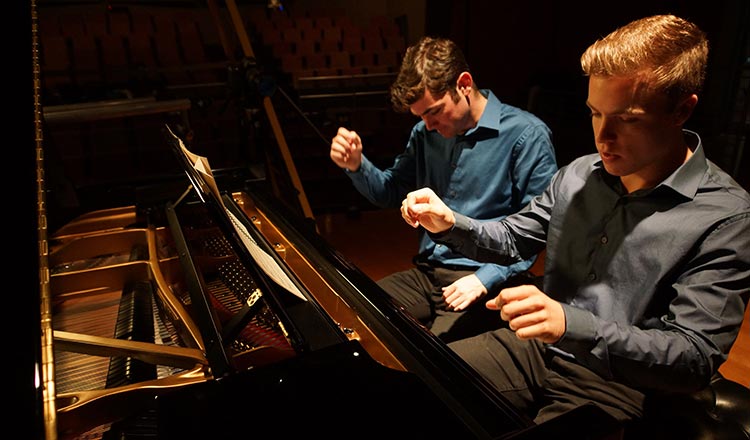 “The Khmer Rouge saw musicians, among other creatives and intellectuals, as the greatest threat to their power. The regime targeted the nation’s best-known musicians, killing most of them in the early years of the genocide.

“We felt this story, about which we knew little prior to this project, was too important not to share with a greater audience.”

The duo raised money for the project via crowd funding platform Kickstarter, and began research over a year ago.

“When we started our research in January 2018, we were working on different continents – I was in Los Angeles, and Ambrose was working in Copenhagen,” Alex says.

“We began composing pianistic versions of the traditional and rock ‘n’ roll melodies we heard. Although we were able to start ideas on our own, it is far more productive to compose together. Therefore we met in Los Angeles in May 2018 to start working on a four-hand piano version of the ideas we hashed out individually.

“We have spent the majority of December and January finishing our composition, building our ideas out and writing out vocal and instrumental parts for our Cambodian collaborators.”

The composers were also struck by the melting pot identity of Cambodian music.

“We found the amalgamation of diverse instruments, genres, ethnic styles, and historical eras very intriguing not only from a musical perspective but from a cultural perspective as well,” says Ambrose Soehn.

“In addition, we are especially interested in how Cambodia’s musical fabric has changed over the decades as a result of geopolitical factors, technology, and social popularity.

“We first became fascinated by the trance-like nature of the nation’s traditional performance ensembles made up of percussive, stringed, and gong instruments.”

“The three-movement composition will be around 15-20 minutes when performed, as there are solo sections which can vary in length depending on the mood and the performers’ intentions,” says Alex. “The movements tell stories of Cambodia before, during, and after the genocide respectively.

“We will be refining each performer’s part until the week of the performance. Because we have only collaborated virtually up to this point, playing together in person during our rehearsals will introduce a group dynamic that will ultimately strengthen the piece as each musician’s sensibilities can be finely adjusted.”

And while the Americans were refining their compositions, moves were afoot to get the show on the road in Cambodia.

Through a mutual friend, Alex and Ambrose made contact with Oum Rotanak, aka DJ Oro, founder of the Cambodian Vintage Music Archive, which archives classic Cambodian rock ‘n’ roll.

Oum Rotanak looked after the musical side of things, and handed the logistics to Siem Reap’s entrepreneur-at-large Adam Rodwell, co-owner of The Little Red Fox Espresso café.

“I was first contacted in August 2018 by Oum Rotanak,” Adam says. “We met a few years ago while working together at one of our Little Red Fox events in Siem Reap.

“He had been working in America to plan the performances over here in Cambodia. They needed someone on the ground in Siem Reap to help with contacts and logistics so he put me in touch with Alex and Ambrose.

“I am a big fan of Cambodian music in the 60s and 70s, so the chance to be involved in an event featuring Hong Samley and So Savoeun was very exciting for me. Then when I saw the work Alex and Ambrose had done prior in Auschwitz I knew I wanted to be involved.”

Adam then booked Siem Reap outfit 60 Road Studios for sound and lighting, and gave the nod to Jaya House – River Park as the venue of choice, noting, “Having already worked successfully on the Joss Stone concert in March of 2017, it made sense that an event of this style would, once again, suit perfectly to the aesthetic and ambience that Jaya House – River Park offers.”

WHY? Because Koteka Is The Reason

A great day in Phnom Penh