The government is going ahead with its plans to revamp part of Phnom Penh’s largest water reservoir into a vegetable market, despite complaints from villagers, fishermen and vegetable vendors that the market would be counterproductive to their livelihoods.

Boeng Tamouk lake, also known as Tumnup Kobsrov, is about 15 kilometres away from the city centre. It is one of the last lakes in Phnom Penh relatively unaffected by development, according to Cambodian Urban NGO Sahmakum Teang Tnaut.

The project, which will see 20 hectares around the lake developed to host the market, has already been endorsed by Prime Minister Hun Sen, according to a letter issued on August 2 by the Council Ministers.

“The Office of the Council Ministers would like to inform that the Royal Government has already approved in principle the development of 20 hectares of land in Boeng Tamouk lake to build a market for the supply of vegetables and fruits, complete with parking space,” it said. “We will relocate the vegetable market at Doeum Kor market to the new location in Boeng Tamouk lake.”

Roeun Noeun, a 57-year-old who relies on fish to make a living, yesterday said he is now worried that he will no longer be able to make enough in order to support his family.

“There are many impacts because most villagers here are fishermen,” Mr Noeun said. “They depend on the natural lake for fishing in order to support their family.”

“My life depends on fishing and when the government fills the lake, we will lose our jobs,” Mr Noeun said.

A 35-year-old man who only goes by Pheaktra agreed that the project would prove to be detrimental to his ability to provide for his family. He is also worried that his grandchildren would not be able to experience the lake’s current state.

“If the government fills Boeng Tamouk lake, then we will lose our jobs as fishermen,” Mr Pheaktra said. “No one supports filling the natural lake.”

“In the future, the next generation will no longer be able to see this natural lake,” he added. “We can’t go against the project because we are only ordinary people.”

Chhin Ny, a 34-year-old resident living near the lake, said though it is clear the project is coming, villagers are uncertain over what comes next.

“We heard that they wanted to build a market, but we still do not know which side of the lake they will fill,” Mr Ny said. “If the government needs us to move, then we have to follow it.”

“As a reservoir, it will surely be affected by the reclamation,” he added. “We don’t know, but they surely have other ways to divert water.”

Soeung Saran, acting executive director of Sahmakum Teang Tnaut, yesterday said a public forum should be opened to discuss the impacts of reclaiming parts of the lake.

“If we compare neighbouring cities, some of them managed to maintain their natural lakes, while others work on lakes in order to develop,” Mr Saran said, noting that the government has already filled Boeng Kak and Boeng Tumpon, and is now moving to fill parts of Boeng Tamouk.

“Phnom Penh could be inundated if the lake failed,” Mr Saran added. “Many people will lose their jobs, especially those living around the lake.”

City Hall spokesman Met Meas Pheakdey yesterday defended the development, noting that the public will benefit from the market. 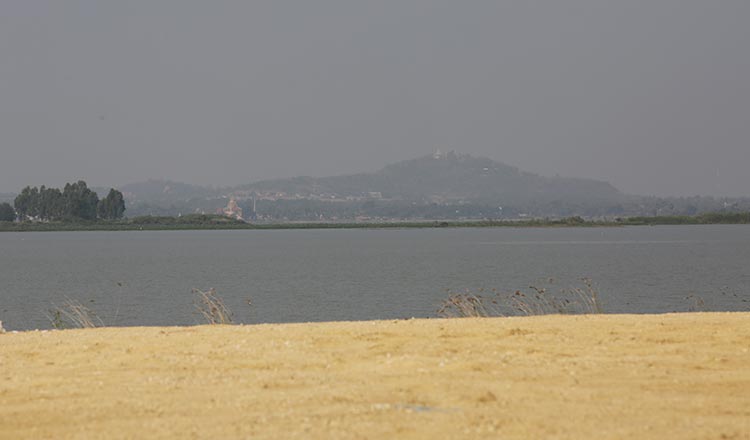 “We are using 20 hectares of the sprawling lake as part of a small development project,” Mr Meas Pheakdey said. “We do not only focus on just conservation, we also focus on development.”

He said that the government has no intentions of relocating Phsar Doeum Kor, but vegetable vendors who sell on Monireth Boulevard will no longer be allowed to sell on the streets.

It is speculated that the authorities will move the vegetable vendors to Tumnup Kobsrov.

“I want to clarify again that there will be no relocation of the Phsar Doeum Kor market, so please don’t worry too much,” Mr Meas Pheakdey said. “The authorities will manage all vegetable vendors along the streets because we cannot allow them affecting public order and creating traffic jams.”

“When the centre of the market is finished, the vegetable vendors can sell there,” he added. “But we do not want them selling on the streets anymore.”

However, he does not yet know when the construction of the central part of the market will commence.

“We don’t know yet when construction will start,” he said. “But our plan says the central part of the market will supply vegetables.”

“We will not go there because it is very far and we would have to spend $10 just to transport our vegetables to our customers in the city,” the vendor said.