W&D factory in Phnom Penh has fired more than 1,000 garment workers who were on strike to demand unpaid benefits.

Last week, the company, with the backing of Phnom Penh Municipal Court, issued an ultimatum to the workers saying that if they did not return to work within 48 hours, they would be fired.

The workers responded by occupying the factory and worker representatives said they would not back down until their demands were met.

The strike continued until Friday, when the company announced that workers who failed to comply with the order were fired.

“If your name is on the list, please take your wage on Tuesday at 3pm,” the company said.

“The factory issued a statement saying that they are to delete our names from the list of workers by Friday evening. We only saw the list on Saturday,” Mr Samnal said. “We were surprised to see our names on the list.”

He added that the company now has the obligation to pay the workers severance on top of missing benefits.

“We are not against the company for firing us, but it has to pay us as stipulated in the Labour Law,” Mr Samnal said. “These include severance, last month’s wage, compensation and seniority.”

According to the Labour Ministry, factories must pay workers a seniority payment once every six months and that factories must also pay severance upon conclusion of an employment contract.

After an employee has been fired a company must also pay their last month’s wages and compensation, on top of the missing benefits. 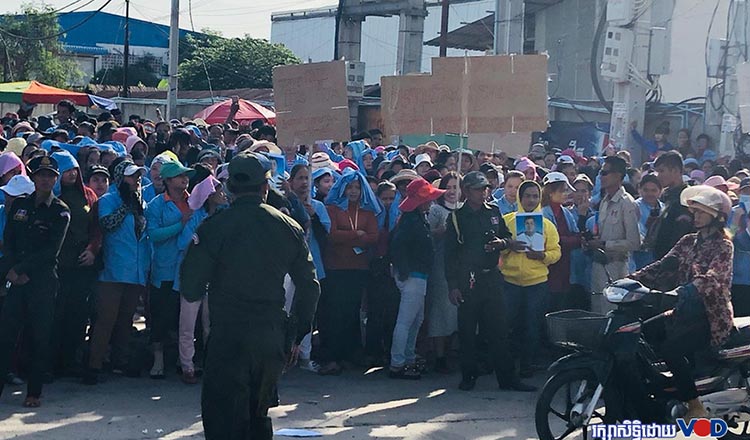 A company is also required to issue a notice in advance if workers are to be sacked.

Mr Samnal said he now plans to hold a rally for missing wages and benefits in front of Prime Minister Hun Sen’s home.

“We expect that our demands will be heard by Prime Minister Hun Sen and he will not abandon us garment workers,” he said.

Heng Sour, spokesman of the Labour Ministry, yesterday said the company gave the workers ample time and opportunity to return to work.

“Generally, a company would accept workers to return to work if they didn’t destroy company property, block entrances or threaten other workers,” Mr Sour said, noting that the ministry will continue to monitor the case.

Last week, some of the workers blocked Street 217, where the factory is located, for about an hour until the authorities told them to return to their homes.

Mr Samnal said garment workers knew that blocking a road is illegal, noting that they did not have a choice as the matter was considered urgent for them.