One soldier died and eight people were injured in a traffic accident yesterday in Kampong Speu province after a truck transporting rocks hit about ten vehicles along National Road 4 when its breaks failed.

“Eight people were injured and some have serious wounds and have been sent to hospital in Phnom Penh,” he said.

Say Bunthorn, Phnom Sruoch district police chief, said the accident occurred at about 1.10pm along National Road 4 in Treng Trayoeng commune after a truck carrying rocks had its breaks fail.

“Our police officials have reported that one person died, a soldier, and eight people were injured,” he said.

He added there were about ten vehicles damaged by the rampaging truck that could not stop as it travelled down a sloped portion of the road. 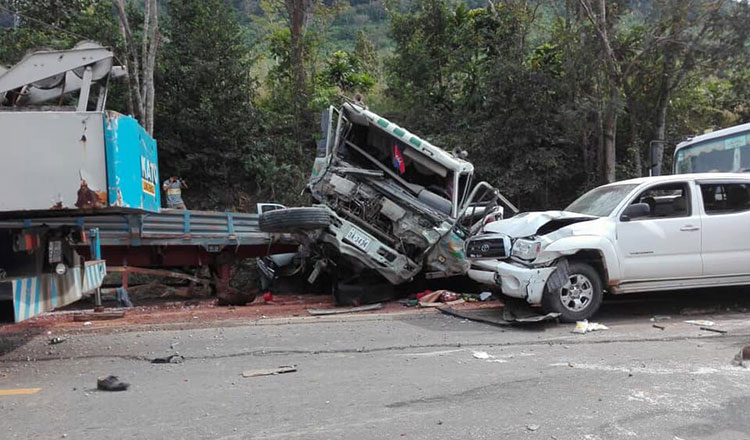 “Traffic was backed up for several hours,” he said.

According to a report from the Interior Ministry’s Department of Traffic Police and Public Order, 1,761 people were killed and another 4,771 people were injured in traffic accidents across the Kingdom in 2018.

The report noted that the figures of both deaths and injuries dropped when compared to 2017, when 1,780 people died and 5,539 people were injured in crashes.

Major General Ty Long, deputy chief of the Department of Traffic Police and Public Order, said the rate of deaths and injuries remained a challenging issue despite the drop.

“We are still concerned about traffic accidents even though the number of dead and injured went down in 2018,” he said. “We will continue efforts to further reduce the rate by strengthening traffic law enforcement.”

He noted that most accidents occur in Phnom Penh, and Kandal, Battambang, Preah Sihanouk and Kampong Speu provinces.

“Some people do not respect the traffic laws,” he said. “An increase in vehicles on the roads also contribute to ongoing crashes.”