Preah Sihanouk Provincial Court yesterday charged three Chinese nationals for allegedly being involved in the stabbing and attempted robbery of a Chinese civil engineer at restaurant parking lot on Monday.

Major Sok Sophal, an officer with the provincial police, yesterday identified the accused as Chen Bing, Zhao Qingsong and a man only known as Guo.

Maj Sophal said they were arrested at about 5am at their rental home in Sihanoukville’s Bei commune.

He added that the three were able to be apprehended by police after Zhang Hong, the first to be arrested, gave police the details of his accomplices.

On Monday, Mr Zhang was arrested for stabbing Chinese civil engineer Lin Young Fei at a parking lot of a Chinese restaurant in the city’s Bei commune.

Police then said three other suspects were standing look out as Mr Zhang entered Mr Lin’s car, pointed a knife at him and demanded valuables.

“While the victim [Mr Lin] unlocked his car door, Mr Zhang immediately jumped inside,” Maj Sophal said. “The three other Chinese men were standing guard as Mr Zhang carried out the act.”

“Mr Zhang pointed a knife at Mr Lin and ordered him to relinquish money and other valuables,” he said, adding that Mr Lin refused and instead shouted for help, causing Mr Zhang to begin stabbing the victim.

Nearby police officers and security guards, who heard the shouts for help, intervened to stop Mr Zhang. 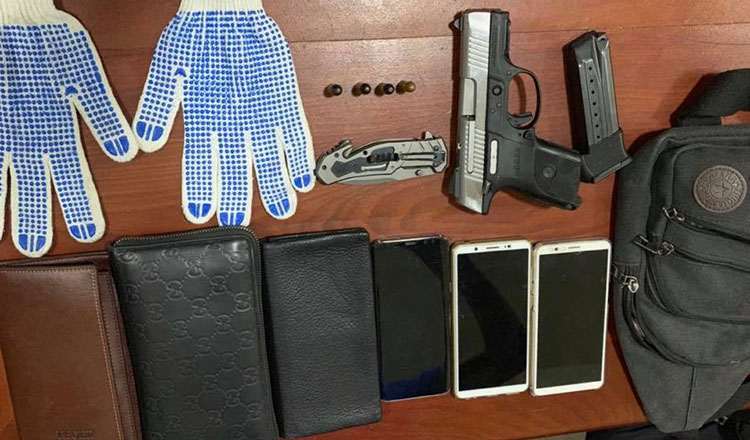 As of yesterday, Mr Lin remained in hospital for treatment.

Maj Sophal said that Mr Zhang confessed during interrogation that his accomplices were living in Bei commune, prompting police to make arrests on Wednesday.

After the arrests were made, police confiscated a pistol and four bullets.

All four of the accused were sent to court at the same time yesterday where they were questioned and charged.

Mr Ly Sok added that the pistol and ammunition are believed to belong to Mr Zhang.

If convicted, all four men could face up to ten years in prison.