Ticket sales revenue at the Angkor Archaeological Park grew by 8 percent in 2018, a slowdown compared to 2017 when year-on-year revenue growth reached 72 percent.

The park generated $116.6 million from passes, according to a statement from the Angkor Enterprise, the company in charge of ticket sales.

From January to December, 2.5 million foreign travellers visited the famed temple complex, an increase of 5.4 percent compared to 2017, when ticket prices were bumped up.

The new prices include a $2 donation to children hospitals in Cambodia run by the Kantha Bopha Foundation. In 2018, $5.1 million were collected in donations for the organisation.

Industry insiders agreed on the significance of the revenue figures, but said there is still a lot of room for improvement in the sector and urged companies to create new products and packages to attract more tourists to the Kingdom and make them stay longer. 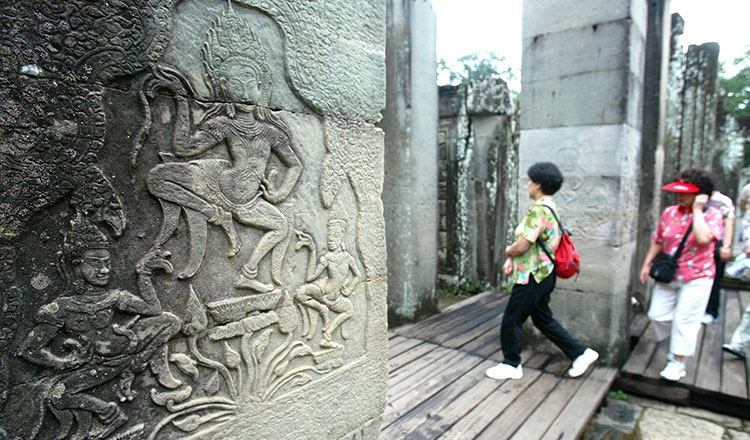 “Revenue keeps growing, but at a slower rate than what the ministry and the private sector expected,” Mr Vandy said. “However, this growth shows that Siem Reap province, particularly the ancient temples of Angkor, is still the biggest tourist draw in the Kingdom.”

Developing new tourism sites in other areas of the country should be a priority, as well as improving the road network to access them, Mr Vandy said.

Chhay Sivlin, president of the Cambodian Association of Travel Agents, echoed Mr Vandy’s remarks, but called on provincial authorities to give Siem Reap city and key areas around the temple complex a facelift to attract more visitors.

“We’ve seen the number of foreign visitors at the temples of Angkor increase every year. This is because the Ministry of Tourism is implementing the right policies and because tour agents are doing a good job promoting Cambodia to the world,” Ms Sivlin said.

Figures from the Ministry of Tourism show that 4.8 million foreign visitors travelled to the Kingdom during the first ten months of the year. Siem Reap welcomed 2.09 million, while Phnom Penh and the coast received 2.7 million and 700,000, respectively. About 62,000 travellers visited eco-tourism sites around the country.

6.2 million foreigners visited Cambodia in 2018, with the government aiming for 7 million by 2020.