Marika Els’ ‘And Then I Lost My Mind…’

Marika Els showcases her artworks that depict loss, death and rebirth, a search of a stable self and self-acceptance. Som Kanika was at her exhibition.

All the unspoken words, all the bottled up emotions and insecurities – how should we deal with them?

For Marika Els, art is the answer. The painter-slash-puppeteer-slash-teacher from South Africa poured all heart out into the canvas, creating pieces of magical and meaningful paintings that speak of her story.

In an exhibition she called “And Then I Lost My Mind…”, Marika showcases her paintings that depict loss, death and rebirth, a search of a stable self and that ever elusive self-acceptance. Marika’s paintings were exhibited at Cloud on December 6.

“A wise man once told me to paint or draw when I feel overwhelmed and incapable of expressing my emotions. Later that same year, it was all I could do to stay afloat. I guess you could say that life happened and something broke in me and the only way I could deal with things was to lock myself up in my cave of paintings, puppets, and mountains of coffee, and to paint,” she shared.

Marika started mixing colours and shapes when she was young, her home’s walls and furniture served as her first canvas. She shared that it was her father who encouraged her to create art.

“He was my first critic, and the thought of him encouraging my passion inspired me to take a leap and have this exhibition,” she said.

“And Then I Lost my Mind…” was Marika’s first solo exhibition ever in Cambodia. She arrived in Phnom Penh in March 2015 and has been living as an ESL teacher since then.

Her paintings and works are a synthesis of expressionism, surrealism, and whatever else she feels like experimenting with, at any given moment. She enjoys challenging herself artistically in order to find new ways to escape and express her reality. When she can’t use words, she paints.

“I did not paint these paintings for public viewing but rather they are the products of some serious self-therapy. Putting my thoughts on a canvas was a way to express unspoken words, words I still don’t know how to verbalise, and a way to literally see what the confusion inside me looks like. I wanted to make my darkness colourful. Don’t misunderstand me, I don’t mean to sugarcoat it, but I’m trying to show that all the darkness inside has different facets and shades.

“Being able to share my paintings and hear what people see in them and how they can relate to certain pieces was an eye-opening experience. Naturally people might not relate to them in the same way as I do but that’s the beauty of it. We all have different stories.”

Instinct, one of Marika’s personal favourites, portrays a bleeding heart being offered to a cat.

“Truth be told, that painting actually makes me very uncomfortable because it is so childlike and almost cartoonish. But it allowed me to bleed colour – all the colours inside me. It’s about offering yourself without expectation and the willingness to be vulnerable”. 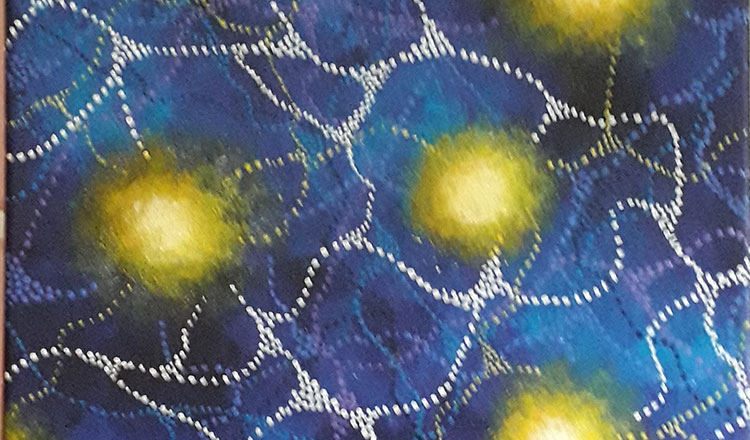