More than 1,000 candidates took exams to become provincial or capital police officers on Monday throughout the country, according to the Interior Ministry’s Personnel Department.

Pen Vibol, director of the department, said yesterday that the exam not only includes entrance to become provincial or capital police officers, but also to work within Ministry of Interior departments.

Mr Vibol said about 2,000 police officers retiring every year need to be replaced by new recruits.

“On average, there are about 2,000 police officers nationwide who retire each year, or are no longer able to work due to injury or death,” he said. “So we have to recruit more.”

“In the past, we had 60,000 police officers for security of a population of about 11 million,” he said. “Now, the population is 16 million, but the number of them remain similar because the government does not have enough budget,” he added. 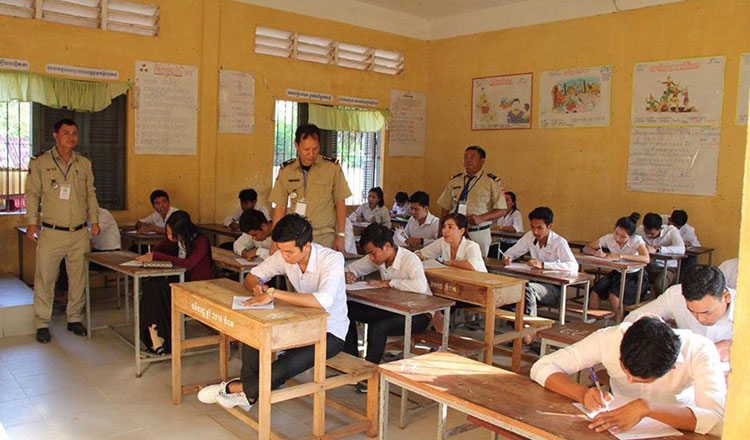 Major General Mao Chanmathurith, chief of Kampot provincial police where 40 police officers are being recruited, said that the process of the exam is going smoothly and only one of the candidates was absent for the exam.

“The exam process is going smoothly with no irregularities arising,” he said. “Only one candidate was absent. There are 220 candidates taking part in the exam, including 72 women, and nine rooms were used to accommodate them.”

A candidate who declined to be named and who took the exam in the capital said that the exam covers general knowledge and police related questions.

The candidate said he just came back from South Korea where he was a migrant worker and now wishes to be a police officer.

“I took the exam for the post at the municipal police. The exam was a bit difficult, but I tried to answer the questions fully to the best of my ability,” he said. “There were a lot of competitors and I need to be the best to get selected.”