Phnom Penh Municipal Court on Friday began the trial against six union leaders over minimum wage protests in the wake of the 2013 election that turned violent and led to authorities opening fire and killing at least five demonstrators.

The court on Friday began the trial for the six union leaders, but none attended the hearing and sent their lawyers instead.

During the hearing, the court called upon two police officers who were injured during a clash with demonstrators at the height of the strikes to testify about what happened.

Tim Vuthy, one of the officers, said he was on Veng Sreng Boulevard when demonstrators began throwing stones.

“I demand $10,000 as compensation due to my left eye that was blinded because a stone hit me,” Mr Vuthy said. “I spent about $9,000 for medical treatment in Vietnam.”

Prior to the hearing, the Garment Manufacturers Association in Cambodia wrote to the court to withdraw a complaint it filed against the unionists. The court said that the judicial process must still be conducted regardless of the withdrawal.

Mr Sina, president of the Collective Union of the Movement of Workers, yesterday said the government is attempting to appease the European Union by wrapping up the cases in order to retain the Everything-but-arms treaty, to which Cambodia’s access is being reviewed by the EU over perceived setbacks to democracy.

“This is a positive sign that would make the EU reconsider Cambodia’s EBA status,” Mr Sina said of the cases ending. “The government has responded by ensuring freedom of expression and civil society organisations.” 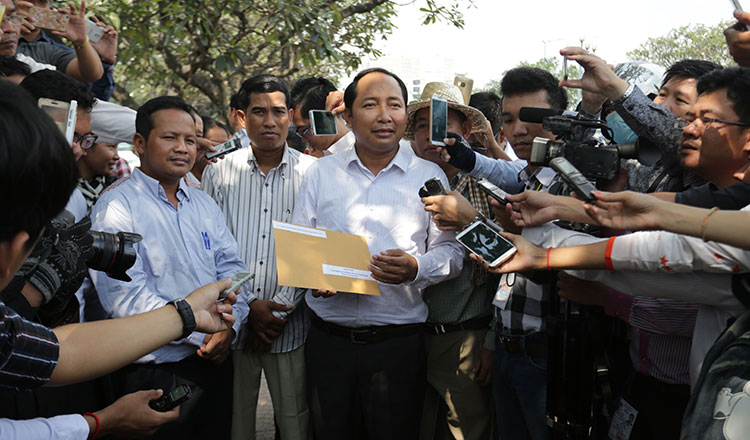 “I did not commit what they’re accusing me of,” he said. “I hope all cases filed against the union leaders will end soon, including those leaders in the provinces.”

Ms Sophorn, president of the Cambodian Alliance of Trade Unions, yesterday said she should never have been charged in the first place.

“The court should acquit me of all charges because this is unreasonable,” she said. “I was not even there on Veng Sreng Beaulevard when the clash happened. I did not even participate in what the court is accusing me of.”

Judge Im Vannak said verdicts for all six unionists are due tomorrow.

NagaWorld to plant 1,000 trees for a greener Cambodia