Battambang provincial education and health department officials will visit schools in Thmar Koul district this week to educate students on how to avoid fainting during class.

Ouk Vithyea, deputy director of the provincial health department, said a series of fainting cases began on December 6 in Thmar Koul High School which resulted in two students being sent to hospital.

Mr Vithyea said that a second incident occurred in the same school the following day and resulted in 71 students fainting.

“We found that the students had used lots of stamina during their lesson because they were studying from morning until about 8pm,” Mr Vithyea said. “The drain caused their health to be weak.”

Ngy Seth, director of the provincial education department, said yesterday that students and faculty were given time off to recover from the ordeal.

“We are letting teachers and students take a break at home beginning next week in order for them to forget what happened at school,” Mr Seth said. “We are still following up with the students who fainted. If their condition is still bad, we will allow them to continue to rest at home.”

He added that his department will cooperate with the provincial health department to educate teachers, students and food vendors on how to take care of their health. 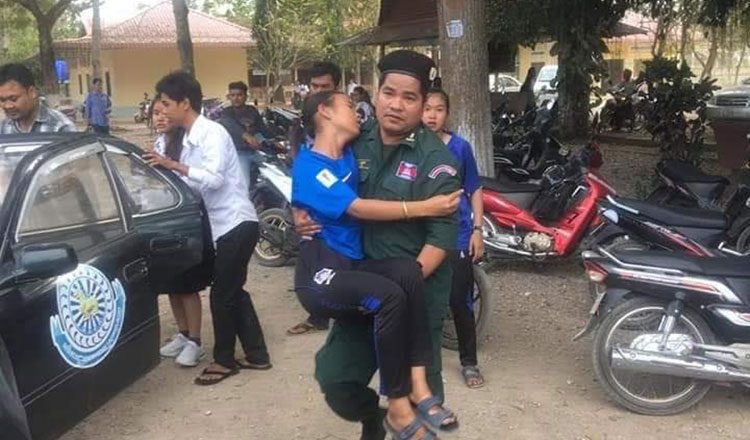 “We want to tell the students to not stay up late browsing Facebook, have enough sleep, eat good food and regularly check their health because most of the students who fainted lacked calcium,” Mr Seth said, noting that a chemical weed-killer used on the school’s grounds has also been banned.

Mr Vithyea said that many of the students did not eat breakfast, had a late lunch, did not take enough breaks in between study sessions and some stayed up late browsing Facebook.

“On December 11, we will have a team of health officials to go to schools in the district to explain to teachers and students on how to take care of their health,” he said.

Meanwhile, officials have denied that a mass medical check-up conducted by a Chinese medical team caused the students to faint.

“The medical team did not give injections or take blood from the students,” Mr Sun Pharith said. “That is just a rumour.”

Construction materials to be taken off roads