The F16s: wall of good melodies

The music of The F16s, from Chennai, South India, will keep playing on in your head if you do listen to them. Whether it’s ‘My Shallow Love’ or ‘Moonchild’, there’s no escaping the ‘earworms’ that would creep into your ears and lodge themselves in your brain. Sonny Inbaraj Krishnan found that out when he caught up with the alternative/electro indie rockers at Oscar’s on the Corner last weekend.

Sometimes normal musical imagery crosses a line and becomes, so to speak, pathological, as when a certain fragment of music repeats itself incessantly – sometimes maddeningly for days on end, writes the late renowned professor of neurology Oliver Sacks in ‘Musicopilia’.

These repetitions referred to as ‘earworms’, or as Sacks calls them ‘brainworms’, are often a well-defined phrase or theme of three or four bars that go on for days on end, circling in the mind before fading away. In certain cases, they never go away as singer-songwriter Carole King once said: “Music is playing inside my head, over and over again. There’s no end!” 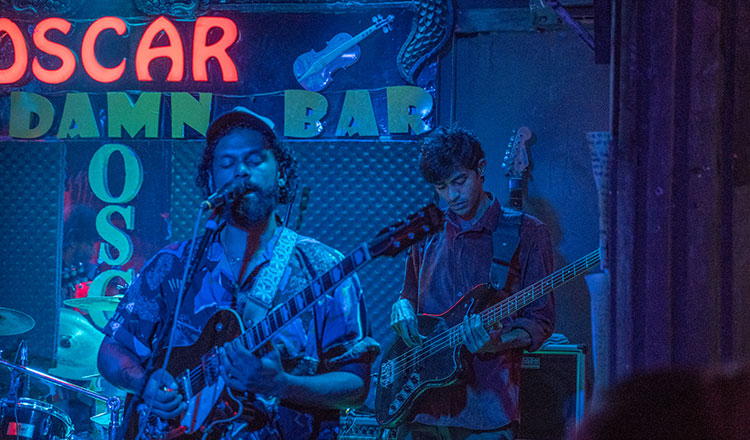 That said, ‘earworms’ would certainly creep in you if you’re at The F16s live concert, something I found out when I watched this indie band from Chennai, South India, perform in Oscar’s on the Corner last weekend.

The F16s’ frontman Joshua Fernandez’s guitar riffs, with Harshan Radhakrishnan’s keyboard notes and sampling loops, backed by Abhinav Krishnaswamy’s rhythm guitar and Sashank Manoha on bass, tends to trap you in the tempo of their songs and will run constantly in your mind for days. Finally it will fade away but will then return again and again. It’s infectious.

Take The F16s ‘My Shallow Love’ and ‘Moon Child’. The distinctive musical shape of the songs and their tonal and melodic oddness will definitely play a big part in imprinting them in your brain. 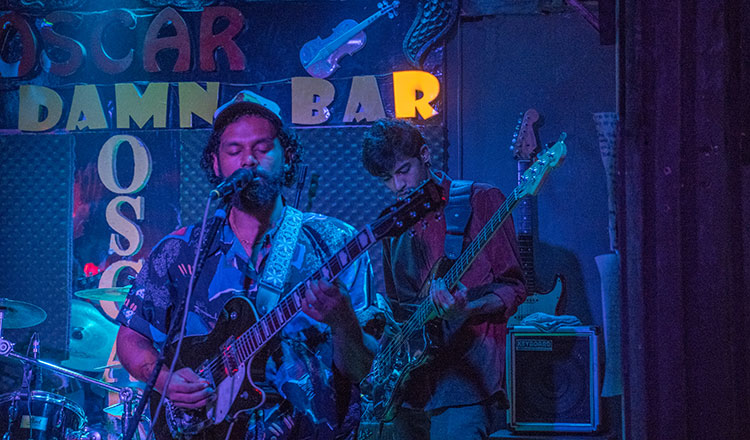 Now enough of the jibber-jabber on ‘earworms’ and let’s get to who The F16s are.

Before we go on further, just a point to note. The F16s on their Cambodian tour had to perform without their drummer Vikram Yesudas who at the last minute, enroute to Phnom Penh, was deported by Vietnamese immigration authorities.

“There were some irregularities in his Indian passport and his passport pages were falling apart,” Harshan told Good Times2. 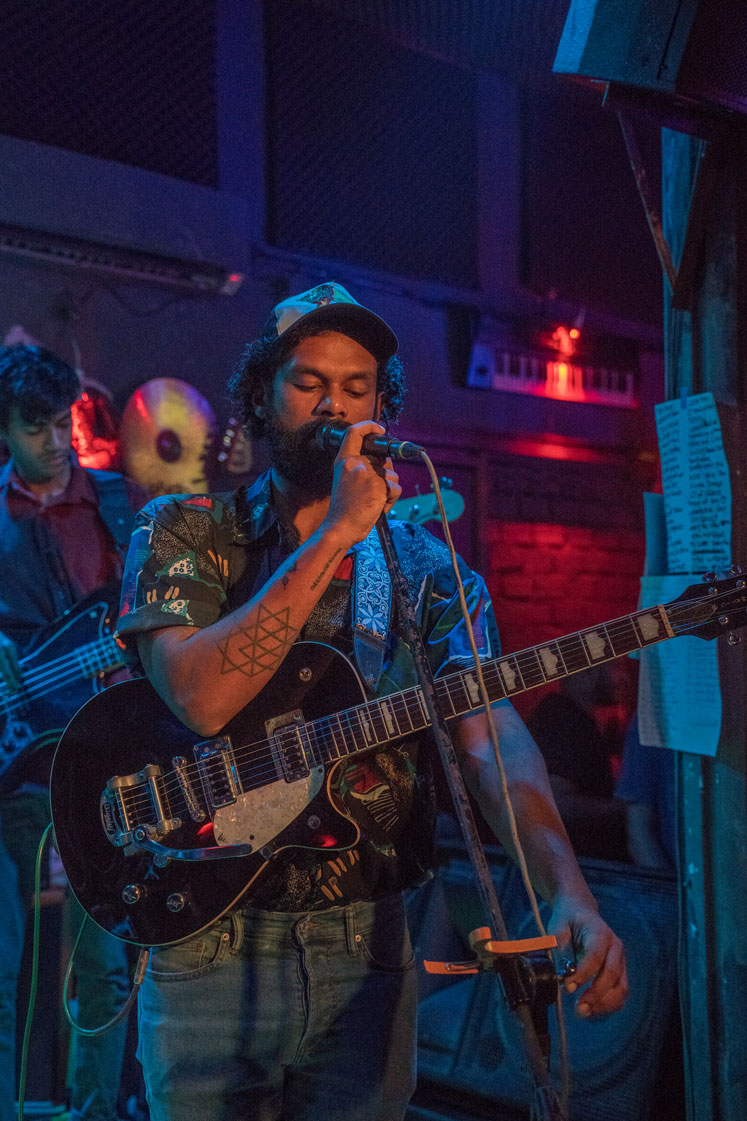 “Immigration didn’t allow him to get on his flight. We then had no choice but to programme the drum tracks for our Cambodian tour.

“This is the first time we’re performing live without a drummer!”

But the four Chennai lads carried the night through in Oscar’s. Joshua’s self-assured conversational delivery, backed up by the primal energy of Harshan, Adhinav and Sashank backing him, shifted the crowd’s attention to the wall of good melodies oozing out of them – akin to a massive release of oxytocin (the antidote to depressive feelings) under the influence of MDMA.

The F16s might sound like Arctic Monkeys, The Strokes, The Black Keys or Vampire Weekend all rolled into one with their influences so deeply rooted in the post-punk era.

“We feed off a lot from our influences. We listen to the same music, too, but on a different wavelength. We don’t want to sound like the bands we listen to but at the same time, blending together seems nice,” revealed Sashank.

“What’s the point of having two Arctic Monkeys or two Vampire Weekends?”

This reminds one of The Rolling Stones reinterpreting blues classics and blending them into the unique Mick Jagger-Keith Richards blues-rock style that shook the world.

“If you don’t know the blues… there’s no point in picking up the guitar and playing rock and roll or any other form of popular music,” Keith Richards once said.

What are the songs of The F16s? For one, they revolve around frustrated relationships without any resolution or insight into them – a reminder of the impetuousness of youth.

“It’s terrible lyrics,” admitted Joshua. “It’s mostly matters of the heart that I write about. I don’t publicly express my opinions about politics and I don’t want to.”

“I’m more comfortable with heartbreaks and emotions which come easier to me to write about,” he added. “It’s more melancholy and heartstrings. It makes the music easier to relate to.”

That The F16s hail from Chennai in South India is a point of interest in itself. Who would have ever thought that Chennai, home to South Indian maestro composers KJ Yesudas, AR Rahman and S.P. Balasubrahmanyam, would conceive a world-class indie band?

For instance, take The F16s’ hit ‘Moonchild’ from their album Triggerpunkte. In August, it had reached over a million streams on Spotify and is set to increase more.

Nonetheless, the time has come for The F16s to move on having played all over India – from indie festivals, to universities and elite Indian Institute of Technology campuses, and remote Nagaland bordering Myanmar.

“We have extinguished most of the places to play in India,” said Abhinav. “Finding new places to play, outside of India is very exciting and we want to expand our fan-base.” 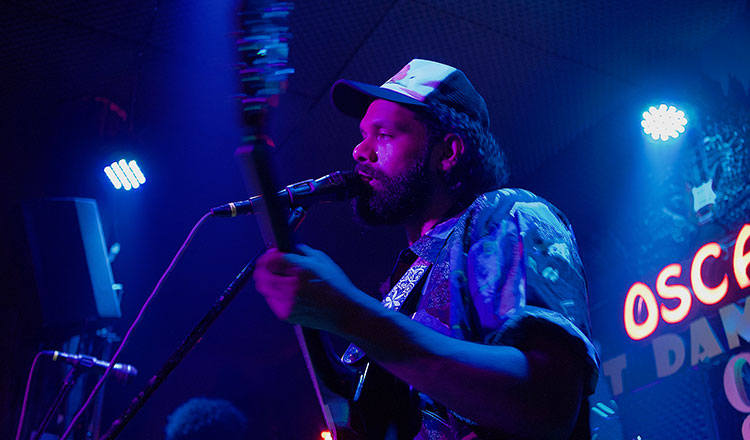 Added Harshan: “The challenge for an Indian band is to stand the test of time. It doesn’t pay much, especially if you don’t lean to the Bollywood side of things.”

But bigger things seem to be in store for The F16s as they make inroads to Southeast Asia.

“We actually met some great bands in Thailand whom we played with in Bangkok and we plan to bring them to India. Maybe we could do tours with them. It’s all in the pipeline,” said Sashank.

“Southeast Asia is fascinating and there’s so much of talent to collaborate with.”

How Hip-Hop continues to save lives

A meeting of chapei masters and artists