All 232 Chinese nationals were flown back to China at about 9.30am from Phnom Penh International Airport.

“They were involved in VoIP scams and extorted money, via the internet and phones, from victims in China,” Lt Gen Heisela said. “This is the fifth time this year that we have deported VoIP scammers from the Kingdom.” 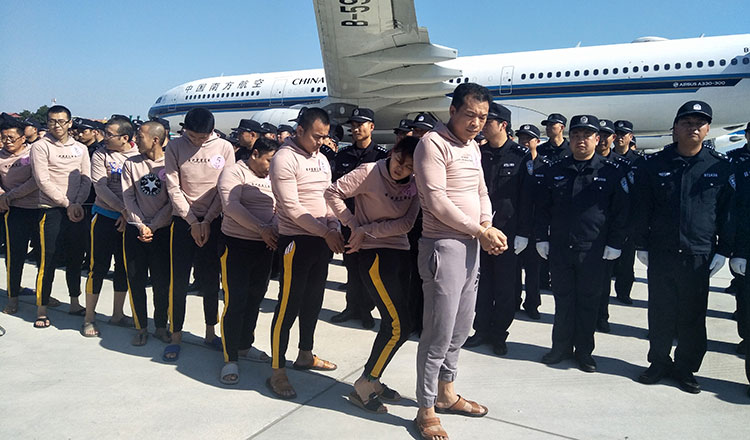 “Up to now we have not found any Cambodian victims of the VoIP scams and most of the victims were Chinese nationals living in Guangzhou province,” he added.

Lt Gen Heisela appealed to the public to cooperate with police and provide information about any VoIP scams they come across.

“Cambodia, welcomes foreign businessmen and investors who come here to run legal businesses, but we will crack down on foreigners who commit crimes,” he said.

“We took more than three months to track down the VoIP scammers before raiding their rental houses and arresting them,” he said.

Lt Gen Heisela said that since 2014, the General Immigration Department has deported 15,366 foreigners from 93 countries who committed VoIP scams and other economic crimes.

He added that so far this year the department has deported 775 Chinese nationals, including 150 women, who committed extortion and fraud using VoIP.

An estimated 1.5 million Chinese tourists have visited Cambodia so far this year. The number is about 300,000 higher when compared to last year’s 1.2 million.