The late Dr Beat Richner’s ashes have arrived in Cambodia to be placed in a stupa in front of Jayavarman VII hospital, a branch of the Kantha Bopha Children’s hospitals, in Siem Reap province.

The ashes arrived at Siem Reap international Airport, where Royal Palace Minister Kong Som Ol and government officers received them before marching in a procession to the Jayavarman VII hospital where the stupa was built to pay tribute to Dr Richner.

Hundreds of people, including students, lined the streets to watch the procession.

Ms Annaregula expressed satisfaction that her brother’s ashes would be placed in the stupa, thus fulfilling his dying wish.

She added that it is fitting for his ashes to be in Siem Reap so that all Cambodians who came to love and respect him could pay tribute. 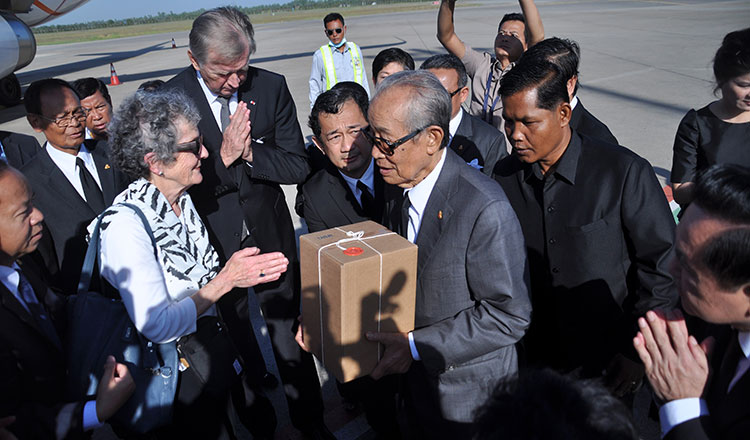 Ms Annaregula said she considers Cambodia to be Dr Richner’s home, where he was well known and liked, and that is why she decided to bring his ashes to the Kingdom.

“I always felt that he belonged here, where so many people knew him and remember him well,” she said.

Hospital head Yay Chantha said that before Dr Richner died he had said that he wanted all Cambodian children to continue to have equal access to free treatment at Kantha Bopha hospitals.

“The last words of Dr Beat Richner were that Cambodian children should not be charged any fee and they should have equal access to quality treatment,” he said.

Dr Denis Laurent, Kantha Bopha Foundation’s chief operating officer, said that even though Dr Richner was gone, the Kantha Bopha hospital will carry on his legacy.

He added that it was Dr Richner’s dream to set up the hospitals, and his dream become a reality with the establishment of five Kantha Bopha hospitals with more than 2,000 staff working to help Cambodian children.

Dr Richner, the founder of the Kantha Bopha Children’s Hospitals, died in September in Switzerland at the age of 71.