Home - Aiding the country by following his passion

Aiding the country by following his passion

When Cheng Kimchheav graduated from high school and began work as a Thai translator, he stumbled upon his passion while working for a client.

While he was translating at an exhibition, he met a Thai waste recycling technician. The two spoke and Mr Kimchheav developed a keen interest in realising his own recycling ideas.

“I used to go to neighbouring countries all the time – that’s how I met the waste recycling technician,” he says. “I became interested and went for a three-month training course at a waste processing factory. Eventually, I opened this Battambang facility.”

Mr Kimchheav, 37, is the owner of a recycling facility located on the outskirts of Battambang’s provincial city. The facility began operating in March last year with about $10,000 capital.

“We collect one to two tonnes of plastic bag wastes each day for recycling. This is not a for-profit business – we do this because we love the environment and we want it clean,” he says. “Otherwise, the amount of plastic bags piled in dump sites will substantially increase more and more. When plastic bags have to be burned, it affects the lives of people nearby due to toxic substances in the air.”

“I started this facility because I thought it was a job needed to be done for Cambodia,” he adds. “Doing this job also helps the environment to be clean. The initial investment costs were small because there was little competition.”

According to the European Union and the ACRA Foundation, the average Cambodian uses more than 2,000 plastic bags per year, a number ten times higher when compared to the average consumption in the EU and China.

Mr Kimchheav buys plastic bags from rubbish collectors near dumpsites in the provinces of Battambang and Siem Reap. He also relies on individuals who directly bring plastic bags to his facility.

He says the process of recycling plastic is tedious at first, but with enough help, the job can be done effectively.

“First, we buy plastic bags and prepare to clean them. There are a number of workers here who cut tied-up bags to be more manageable. After washing the bags, we put the plastic into a machine to dry so we can resell it,” Mr Kimchheav says. “In my facility, we have a machine that refines plastic bags into smaller pieces, those are called our semi-finished products.”

“This is a business that can be inclusive to everyone, even small families. If they are interested, we can teach what we know and buy plastic from them,” he adds. “Others can find plastic wastes in dumpsites and we can clean, dry and sell the finished products.”

For every kilogram of plastic bags, Mr Kimchheav pays about $0.12. After the process of recycling and drying the product, he then goes to traders in Thailand and Vietnam to sell the bags for about $0.25 per kilogram.

If the bags can be refined into smaller pieces of plastic, each kilogram can garner up to about $0.50 per kilogram.

“Each tonne of bags can lose about 400 to 450 kilograms during the recycling process, which is nearly half,” he says. “This is because bags can contain water, soil, pieces of vegetable, and other things we may have to remove first.”

To remedy the facility’s lack of capabilities in recycling, Mr Kimchheav sells unrecyclable plastics to traders in Vietnam for about $0.05 per kilogram.“We still buy plastic we are unable to process at this time because if we don’t, the plastic will just go back to the dump,” he says. “So we buy it still in order to prevent it from returning to the dumps.”

One year into his venture, he now has enough experience to identify and solve problems at his facility. These include staff training and odour pollution management.

“The most difficult problem is that our employees do not always know the filtering process – they don’t know how to separate the types of plastic bags – they think all plastic bags are the same,” Mr Kimchheav says. “So we have to teach them – which costs about $5 per day.”

“Another problem is that we are running a small-scale operation – we do not have large machinery. We rely on the sun, so when it rains for three consecutive days, we have to stop processing,” he adds. “If there’s no sunlight, the bags won’t get dry – it’s difficult for us during the rainy season.”

The other challenge for the facility is complaints from people who live nearby. The facility is located in Battambang city – a city of about 200,000 people.

Lim Sang, a 26-year-old resident living nearby Mr Kimchheav’s recycling facility, says the odour pollution began a little over a year ago. She says living close to the facility impacts the lives of her family.

“When they pile the plastic they collect the smell is really bad. Sometimes, we feel like we want to vomit when we eat because of the smell,” Ms Sang says. “When they wash the bags, flies come. The flies do not just stay there either, the flies come to us when we eat.” 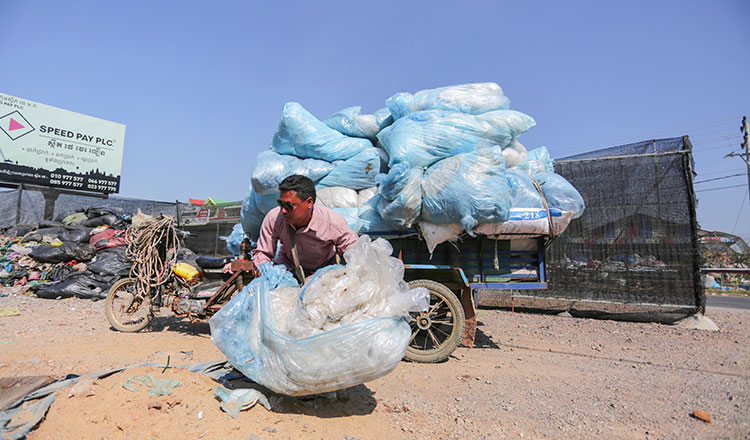 “It’s good that they are recycling, but the chemicals they use to refine the bags are harmful to our health,” she adds. “Yes, recycling cleans the city, but it affects people living here. What I want them to do is move to a field and do it there instead where there is no one living around.”

The resentment is shared with others in the area. A man about 50 metres down the street says the smell is especially rancid during the rainy season.

“When it rains, the smell makes us want to vomit,” the man says. “Residents here collected thumbprints and filed a complaint against the owner. We are hoping that he will move his facility to a different location. However, we have yet to see any action from the authorities.”

Mr Kyden says having the facility contributes to environmental protection by reducing the amount of plastic waste in dumps and public places.

“If the facility doesn’t recycle, it means that plastic waste will go to the dump or be thrown away in public,” he says. “What the facility collects every month is in large amounts. Although it’s a small contribution on its part, it matters because what they’re doing is reducing plastic waste.”

“I would like to ask residents here to reduce the use of plastic bags. I am not asking them to completely stop because there are uses for plastic bags. What I am asking them to do is not to use plastic bags too much,” Mr Kyden adds. “There are other alternatives to using plastic bags. These include using reusable bags or baskets. And as for the plastic bags themselves, please do not throw them away in public places – these bags should be properly disposed of in a rubbish bin.”

As for the solution to those living near Mr Kimchheav’s facility, the provincial environmental department has told Mr Kimchheav to process the plastic at times that will not affect nearby residents, Mr Kyden says.

As for the future, Mr Kimchheav says he has no plans yet to expand his operation to Phnom Penh or other provinces. He says that the first thing on his agenda right now is to relocate to a place away from packed neighbourhoods.

He also wants to have the capability to recycle hard plastic.

“Other types of plastic from old electronics and vehicles are worthless right now to the rubbish collectors,” Mr Kimchheav says. “In the future, I also want to recycle those types of plastic.”