The National Assembly is reviewing a five-year ban on more than 100 members of the former opposition party, which could allow them to return to politics, following threats by the European Union to revoke the Everything-but-arms treaty.

The EU last month began a formal procedure to strip Cambodia of its EBA initiative after Prime Minister Hun Sen returned to power in a July election in which the ruling CPP won all 125 parliamentary seats.

“In order to further promote democracy and the rule of law, the National Assembly is reviewing legal provisions to enable individuals who were banned from politics to resume their political activities,” a statement from the Foreign Affairs Ministry said yesterday.

It was referring to a Supreme Court ban on political activity by 118 members of the former opposition CNRP, which the court dissolved last year over an accusation the party was plotting to topple the government through a colour revolution with the help of the United States, accusations that also led to treason charges against its leader Kem Sokha.

The National Assembly yesterday held a press conference following the ministry statement, in which it said it will convene and amend an article to pave the way for more than 100 senior members of the now-dissolved CNRP to return to politics.

National Assembly spokesman Leng Peng Long said that parliament will insert a paragraph into article 45 so that anyone banned by the Supreme Court from doing politics, standing for election or joining any political parties will have their rights restored.

“This amendment is intended to strengthen democracy, rule of law, and promote the national unity,” Mr Peng Long said.

The National Assembly also released a statement after its press conference, noting that “any persons, who are banned by the court from doing political activities, will be granted their full rights to do politics after passing the validity of the ban defined by the Supreme Court’s verdict or in case those persons are granted rehabilitation by the King according to requests by the Prime Minister and Interior Minister”.

Mr Peng Long said that a session will be held soon for the amendment, but provided no specific date.

“I think that it is a good step,” Mr Chanrath said. “I want to welcome this positive step taken by the National Assembly.”

The Foreign Affairs Ministry statement also addressed a perceived crackdown on press freedom and freedom of speech and assembly, specifically for NGOs.

The English-language Cambodia Daily shut down last year after the government ordered it to pay millions of dollars in back taxes or face closure. About 30 radio stations were also shut last year.

“The Royal Government always cherishes promotion of freedom of press and freedom of expression in accordance with the Constitution and laws in force,” the ministry statement said, noting that the three outlets are free to reopen so long as they follow the law.

“The Cambodia Daily shut down its publication on its own due to its failure to fulfil tax obligations,” it added. “In the event that such liabilities are legally met, the newspaper can resume its operation.”

“The closure of Radio Free Asia’ and Voice of America’ representative offices was self-initiated,” it noted. “The two radio stations are free to reopen their offices in Cambodia.”

Douglas Steele, former general manager of The Cambodia Daily, yesterday directed inquires over the statement to the paper’s Twitter account.

“Like the regime’s many justifications for shutting down the real media and banning opposition, their account of the @cambodiadaily closure is untrue,” a Twitter post said. “They blocked the Daily’s bank accounts on September 6 [last year]. [We] could not bill subscribers/advertisers, could not pay journalists/printer.”

“Seized bank accounts made operations in Phnom Penh impossible so after 24 years, we halted print,” it added. “Blocking of cambodiadaily.com is censorship, not tax collection.”

Spokesmen and representatives of RFA and VOA could not be reached for comment yesterday.

“I think it’s good for them to re-open. I think it would be a good idea for the media outlet representatives to discuss with the government and clear any misunderstandings,” he said. “It’s also important that the media outlets distance themselves from politics. The government must respect media professionalism so that this will not happen again.”

Information Ministry spokesman Meas Sophorn yesterday said the three media organisations are required to meet conditions before they resume operations in the country. 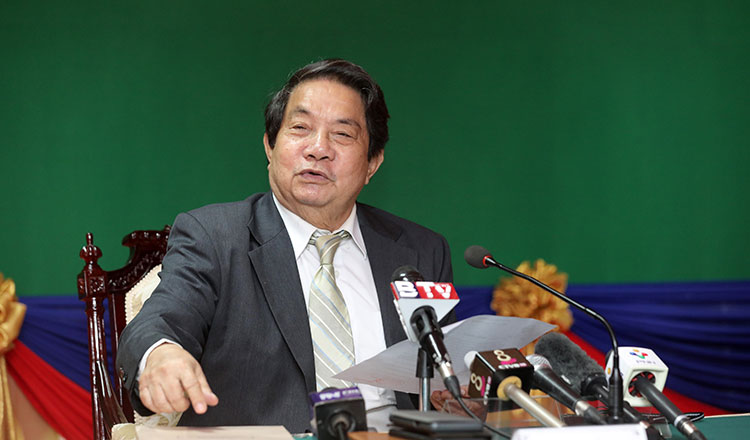 “The ministry will examine their requests if they decide to reopen their offices again. It is important that they follow the law,” Mr Sophorn said. “Of course, ministry officials will talk to them and see what we can do to help, but they need to respect Cambodian laws.”

Meanwhile, the government is also easing restrictions flagged by NGOs operating within the Kingdom.

In the ministry statement yesterday, the government said it will take steps to regain the confidence of NGOs by promising to “commit to promoting a genuine partnership with civil society organisations”.

“[We removed] the requirement of notifying local authorities three days prior to [conducting] activities,” it said. “[We will] hold regular consultative forums with civil society every six months or when necessary.”

The EU, the world’s largest trading bloc, recently launched a six-month review of Cambodia’s duty-free access, meaning its garments, sugar and other exports could face tariffs within 12 months, under EU rules.

Naly Pilorge, director of rights group Licadho, said the government statements issued yesterday were likely a way to placate the EU, which began the EBA review based upon perceived setbacks to democracy and human rights within the Kingdom.

“These announcements are likely conditions under withdrawal of ‘Everything But Arms (EBA)’,” she said. “As with any announcements made in Cambodia, it’s only possible to assess if they are genuine after the implementation of such announcements.”

Sam Rainsy made acting president of the dissolved CNRP