Cambodian women faced challenges when entering politics during last year’s commune elections, according to a group of NGOs that trained women to enter politics.

Funded by the European Union, the Women’s Media Centre of Cambodia and Banteay Srei worked together with German media development organisation DW Akademie to train 117 women who were running for office last year and found that only about 25 percent of them were elected as commune councillors.

Entitled “Women into politics! Greater female participation in Cambodia”, the project ran from 2016 until this year in the provinces of Battambang, Kampong Cham and Siem Reap.

The women were trained on how to make political decisions and campaign prior to last year’s commune election.

The NGOs said they had a hard time finding suitable female candidates and community leaders for the training. They said that many women in the provinces had limited education and often had basic general knowledge and no experience in communications or public speaking.

“This project aimed to help women to be aware that they play a key role in their country’s development as politicians, community leaders, as voters and engaged citizens,” said Frank Viault, head of an EU delegation, at the closing event of the project yesterday. 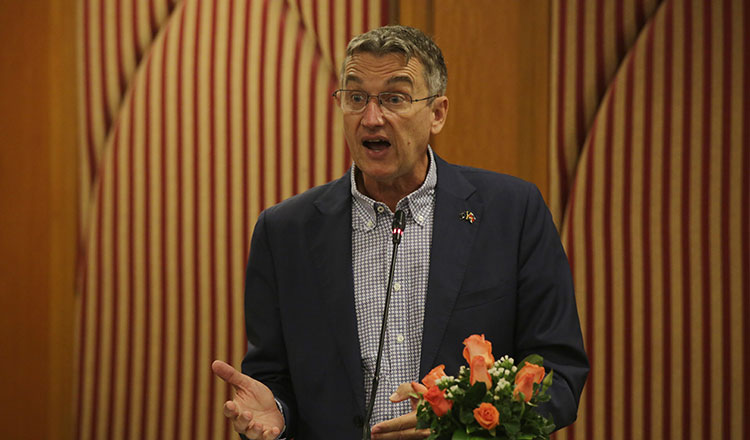 “The project’s overarching objectives, empowerment and greater equality for Cambodian women, were in line with the EU’s focus on gender equality and its commitment to the protection and fulfilment of human rights for women and girls,” he added.

Vuon Soviry, acting director of the WMC, said yesterday that the project was meant to share experiences over the course of three years in order to promote women in politics.

“We encouraged local women to serve as leaders,” Ms Soviry said. “We trained them with skills to enhance their capacity when speaking in a public forum. We also gave them the confidence they needed to gain voices during the commune council election.”

Chhay Sat, a deputy commune chief, said she was elected in 2017 in Doun Keo commune in Siem Reap. Ms Sat said women are still facing challenges when running for office.

“Women are still being discriminated against because many women ran, but only a small amount was elected,” she said. “In my commune, there are nine commune councillors, but only two are women.”

Thida Khus, chairwoman of the Committee to Promote Women in Politics, said yesterday that discrimination is rife within politics.

“There have been no changes to the status quo of women in politics at the National Assembly, local councils and other government institutions,” Ms Khus said. “We see that there is an increased of awareness on the importance of education, but there are a lot of obstacles for women who want to play a role in decision-making because it seems like no one wants a woman to be a leader.”

Meas Muth: ‘I have already prepared my coffin’