Roy Terb, a farmer from the Panong minority, owns four hectares of coffee plantations in Mondulkiri province, in the country’s northeast, that he cultivates using organic techniques.

His farm, located in the elevated terrains of Mondulkiri’s Pich Chreada district, now produces two tonnes of coffee beans a year, but, with Cambodia’s love for coffee reaching new heights every year, he is now thinking of expanding, taking on four more hectares within the next three years.

With demand for the commodity booming, the area used for coffee plantations in Mondulkiri has doubled in just a few years, and it will continue to grow, says Seng Se, chief of agronomy at the provincial department of agriculture.

There are now 206 hectares of coffee plantations in the province, 132 of which belong to corporate entities, while the rest are owned by smallholder farmers, according to Mr Se.

A kilogram of non-organic coffee fetches $2.5 in the local market, much higher than a few years back, when it sold by just $1, Mr Se says, adding that the price for organic coffee is much higher.

Mr Terb is one of around 40 indigenous farmers growing organic coffee beans in some 48 hectares of land in Mondulkiri, producing a total of between 20 to 25 tonnes per year. These 48 hectares in the Northeastern Cambodian province are recognised by the Cambodian Center for Study and Development in Agriculture (CEDAC) as organic plantations.

Though it requires more effort than using pesticides and other chemicals, these farmers choose to follow organic techniques because it guarantees them a higher price for their products.

Walking around with a wooded basket tied to his waist that he uses to collect the coffee beans he is picking from the field, 47-year-old Mr Terb says he started implementing organic methods for growing coffee about two years ago, after he learnt that demand for organic coffee was much higher.

“I chose to use organic techniques because they pretty much guarantee me that I will have buyers,” Mr Terb says.

“It was difficult at first, but thanks to technical assistance from CEDAC, it has become quite an easy affair,” he says as he picks beans in his plantation. 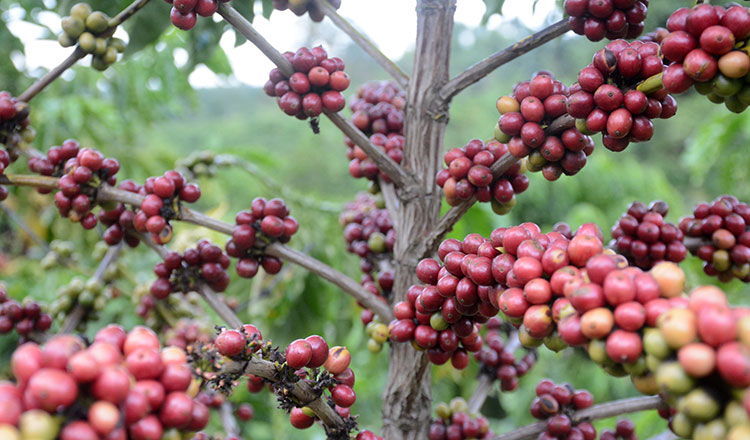 CEDAC helps farmers, particularly from indigenous minorities, adopt organic methods in the cultivation of coffee, which guarantees them a market and allows them to secure higher prices for their products, significantly improving their livelihoods.

Agricultural expert Yang Saing Kumar says that as coffee’s popularity skyrockets, alongside support for locally-made products, both farmers and investors are looking into expanding their operations.

According to research conducted by CEDAC, Cambodia currently produces about 300 tonnes of coffee beans a year. However, it is estimated that total demand in the country sits at around 5,000 tonnes a year, which means that most of the beans Cambodian consume are coming from abroad, particularly Vietnam, Laos and Thailand.

Most coffee grown in the Kingdom belongs to the variety known as Robusta. Cambodia does not present the right conditions for other varieties, such as Arabica, Mr Kumar explains.

“Studies shows that the Robusta variety has great potential in Mondulkiri, so we want local plantations to increase production to help the country reduce reduce imports,” says Mr Kumar, who once served as the executive director of CEDAC, an organisation that he founded.

Although most Robusta plantations are in Mondulkiri, the variety is also grown in Stung Treng, Ratanakkiri, and Palin.

A kilogram of organic coffee sells for a minimum of $4, Mr Kumar explains.

Timor, a local company that supplies roasted coffee to shops and cafes in Phnom Penh, buys around 22 tonnes of coffee beans a year from indigenous farmers working under contract farming schemes.

“We buy the beans directly from the farmers and process them at our factory before sending them to markets in Phnom Penh,” Mr Chenta, a representative of Timor, says.

“We have partnered up with coffee shops as well as organic markets,” Mr Chenta says during a visit to one of the plantations, adding that he only buys organic coffee.

“We focus on organic products as a way to differentiate ourselves, as neighboring countries produce coffee using chemical fertilizers.

“We want to help farmers by guaranteeing their market. The organic standard is the best way to do this and ensure the sustainability of their businesses,” Mr Chenta says.

Brok Vanny, founder of Bingo Coffee in Phnom Penh, a cafe that focuses on organic coffee, says her goal is to promote locally-grown products.

“I choose to sell organic coffee as a way of helping to promote Cambodian products. I also believe that organic coffee is much better for the health of our customers than coffee from abroad whose origin is not clear,” she says.