Despite being well known as educationist, doctor and successful businessman in Cambodia, Dr Mengly J Quach has had his share of tragedy and troubles during the Khmer Rouge regime, which he has rarely shared to the public. But it’s through his newly released book that the president of the Mengly J Quach Education found a platform to speak of his past.

Released in late September this year, “Dangrek Mountains… Unforgettable” (published in Khmer version) follows this Cambodian-American educationist as he digs the grief of his childhood and the struggles for survival of his whole family after the collapse of Khmer Rouge. Dr Mengly reveals that even after the fall of Pol Pot, mass killings along the borders still continued.

Dr Mengly, who grew up in Battambang, enjoyed his childhood with his Cambodian-Chinese parents who managed some orange farms. He had a good life, but it all changed when he turned six.

Dr Mengly’s family was not really surprised with the arrival of communist leadership as his parents were already aware of the plans through their business connections. When the Khmer Rouge gained full control of Phnom Penh and other provinces, his family was forced to evacuate from Battambang to a place they didn’t know. They named it “path to hell”. 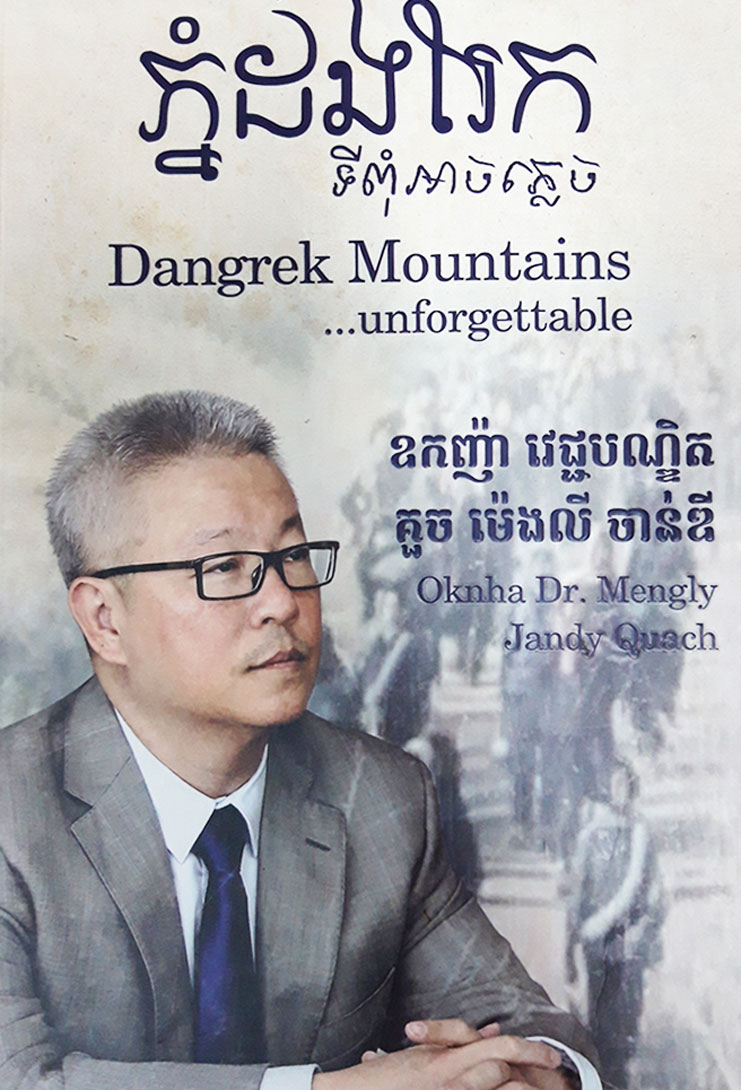 The book gives the readers a clear picture of the overall situation during that time as money and religion were not valued. Forced labour, cruel killings and starvation were widespread.

Cambodians tried to escape the chaos in the kingdom and walked barefooted to the borders, to a place where they thought they would be saved. Dr Mengly, who was already 10 at that time, witnessed and experienced the long journey through the thick forest of the Dangrek Mountains, without knowing where they’d end up to. As a young child, he felt the hopelessness of Khmer women being beaten and raped by other people.

When they reached the Nong Chan refugee camp, Dr Mengly and his family were saddened by the lack of food and place to sleep. They begged for their meals and slept near the cows’ cages. They stayed there for one week before they were told they would be brought to a safe place. Again, they were tricked.

It was during that time when Dr Mengly learned the real value of life and family as he heard Thai soldiers yelling and threatening Khmer refugees. People were forced to walk across the dangerous valley and hidden landmines. As a young boy, everything came to him as a shock. But Dr Mengly also highlighted in the book how his mother remained faithful to Buddha despite their adversaries.

Dr Mengly and his family journeyed hopelessly in the Dangrek along with 85,000 refugees. They were made to walk across landmines by the Thai soldiers. The Cham people were the first group to be killed.

To know more about Dr Mengly J Quach’s story in the Dangrek Mountains and his personal account on the atrocities experienced by Khmer refugees at the Thai border, get a copy of this book at Monument Bookstore and some school libraries.

How do you practice safe driving?