Home - AHF to Mark World AIDS Day, 1M Lives in AHF’s Care with ‘Keep the Promise’ Events across the Globe

AHF to Mark World AIDS Day, 1M Lives in AHF’s Care with ‘Keep the Promise’ Events across the Globe

The world’s largest AIDS organization will celebrate passing the milestone of 1 million lives in care, reached by AHF in early October, as part of its World AIDS Day observations and events in the 42 countries where AHF serves, with thousands expected to attendant participate in commemorative activities worldwide.

AHF wants to remind the world that there is still much work to be done in the battle against HIV/AIDS.

PHNOM PENH , CAMBODIA  – AIDS Healthcare Foundation (AHF), the largest global AIDS organization, is once again set to hold a variety of community events and formal observances in many of the 42 countries in which AHF works during the week leading up to World AIDS Day, officially recognized each year on December 1.

Under the “Keep the Promise on HIV/AIDS!” banner, AHF will mark the progress made in the fight against the epidemic. AHF’s World AIDS Day events also serve as a reminder to world leaders that with 940,000deaths and 1.8 million new infections occurring last year alone, there is still much work to be done in the global fight to defeat AIDS.

AHF events scheduled for World AIDS Day 2018 include various activities ranging from free entrance concerts and unifying marches to exciting fashion shows and empowering advocacy rallies.As always, at many of these events AHF will be providing free HIV testing services, distributing free condoms and holding interactive sessions to raise awareness of HIV/AIDS and related health issues at multiple locations throughout Africa, Asia, Latin America, the Caribbean, Europe and the U.S. 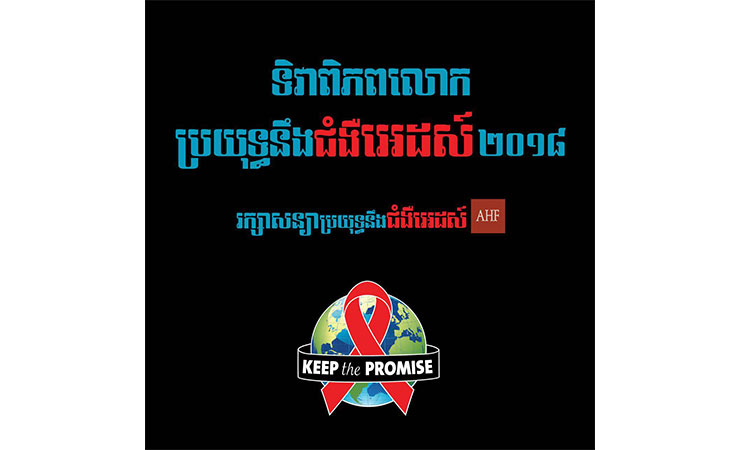 “We hope that this World AIDS Day will reinvigorate the HIV response both in Cambodia and across the globe,” said Chhim Sarath, Asia Bureau Chief (AHF) “There is an estimated 67,000 people living with HIV in Cambodia, and in collaboration with NCHADS and other partners were proud to say that over half of them are receiving care and treatment from​​ AHF support.”

“As we mark World AIDS Day 2018 with AHF events around the globe, we want to take a moment to also reflect on what has been a momentous year for AHF: one million lives in AHF’s care across the 42 countries in which we serve. However, these two events – the 30th observation of World AIDS Day and our own AHF benchmark of 1 million lives now in care – also serve as a solemn reminder about how much work is still left to do,” said AHF President Michael Weinstein. “With almost 37 million people living with HIV or AIDS worldwide, and realistically just over half of them on life saving treatment, it’s clear that the world is not on pace to meet established global treatment targets. In addition, funding for HIV has decreased by three billion dollars over the past six years. If we truly want to keep up and build on the progress we’ve made, world leaders must keep their promise on AIDS by placing it high on the public health agenda and by ensuring that the Global Fund is fully funded. We have come too far to not follow through in our work to end AIDS.”

According to the latest UN data, over 36 million people are living with HIV/AIDS around the world. Each year, 1.8 million people become infected with the virus and 940,000 die of AIDS-related causes.  While millions of people today are accessing lifesaving antiretroviral therapy, millions more still desperately need it. The end of the epidemic is only possible if governments and world leaders Keep the Promise on AIDS.

AIDS Healthcare Foundation (AHF), the largest global AIDS organization, currently provides medical care and/or services to over 1 million people in 42 countries worldwide in the US, Africa, Latin America/Caribbean, the Asia/Pacific Region and Eastern Europe. To learn more about AHF, please visit our website: www.aidshealth.org, find us on Facebook: www.facebook.com/aidshealth and follow us on Twitter: @aidshealthcare and Instagram: @aidshealthcare.