Prime Minister Hun Sen yesterday urged relevant ministry officials to speed up and end long-standing lawsuits against union leaders by the end of the year.

Speaking to about 20,000 garment workers in Kandal province’s Kandal Stung district yesterday, Mr Hun Sen said that all union leaders embroiled in lawsuits had to send their cases to the Labour Ministry, which will then be working with Justice Ministry and courts to end the cases.

“I appeal to all union leaders involved with court cases, please forward those cases to the Labour Ministry so that the minister can work with the justice minister and courts to resolve it as quick as possible,” he said.

“We have to end those cases in 2018,” Mr Hun Sen added. “I have just seen on my What’s app that Ath Thorn forwarded my previous statement to me. I have already sent it to the Labour Minister.”

“This is a part of guaranteeing labour rights, rights of unions and of our workers, but we all have to abide by the laws,” Mr Hun Sen noted. 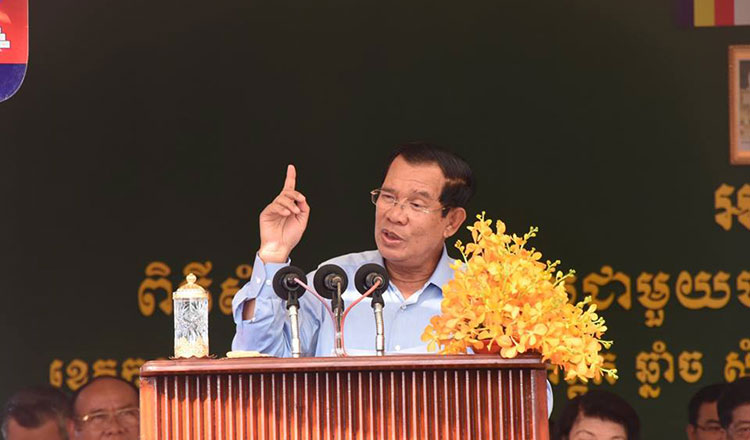 Mr Hun Sen also called for all union leaders to engage in negotiations over labour disputes rather than going on strike and taking to the streets.

“Even if either a small or big problem arises, please solve it together to guarantee the interests of both sides,” he said.

They were sued by factory owners and government officials over intent to commit violence while other charges stemmed from nationwide strikes over minimum wages between 2013 and 2017.

Mr Thorn hailed Mr Hun Sen’s remarks, saying that about 100 cases against him and his local unions would be dismissed soon.

“I think it is good sign that Prime Minister [Hun Sen] has asked officials to speed up the cases against union leaders. When the courts dismiss those complaints, we can continue our work without any pressure,” Mr Thorn said, noting that 50 factories lodged complaints against his union and in some complaints, they demanded $25,000 in compensation.

Ms Sophorn said that union leaders should be cleared of the cases because they worked to promote workers’ rights.

“We think that unions should be encouraged to work rather than being hit by lawsuits because our work is to serve the society, promote rights of the workers and improve working conditions,” she said.

Labour Ministry spokesman Heng Sour could not be reached for comment.