Authorities in Kratie province’s Chhloung district yesterday ordered villagers not to build houses and to remove those already built along the riverbank after five houses collapsed into the river on Tuesday.

District governor Heng Sitha yesterday said that the authorities have banned the construction of houses along the riverbank following the collapse due to heavy rain.

He said the five houses collapsed into the river on Kandol Island on Tuesday night, but there were no injuries and some villagers managed to salvage their belongings.

“The area along riverbank from the district’s pagoda to Chhloung Bridge on the island is at risk of collapsing because of the weather and people living on the island should be careful,” he said. “Luckily no one died and we advise villagers to find a safer place to build houses instead of along the riverbank.”

Mr Sitha urged villagers to immediately report to the authorities if there were any more riverbank collapses. 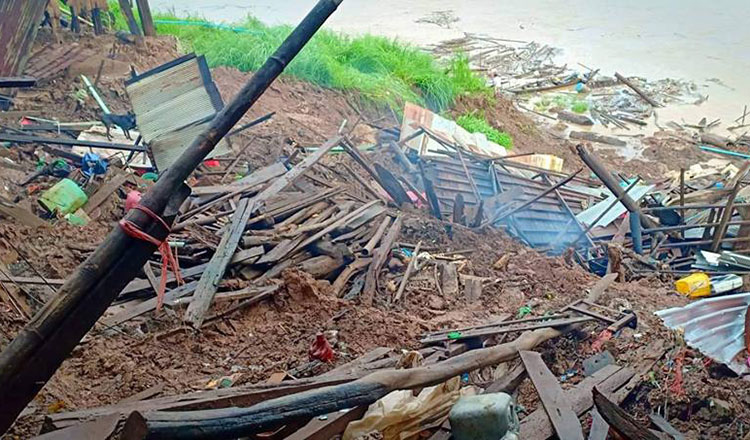 Lam Yang Keang, an 82-year-old villager, yesterday said that his house collapsed into the river during the heavy rain.

“It was raining heavily and the riverbank started collapsing,” he said. “I saw what was happening and hurried out of my house with some of my belongings before it fell into the river.”

The Water Resources and Meteorology Ministry on Saturday warned of impending storms.

It noted that a storm had become a typhoon with wind speeds of 120 kilometres per hour off the coast of Vietnam and was expected to hit the southern parts of Cambodia.

In September, more than ten houses built along the riverbank in Kampong Cham province collapsed into the river due to floods.

Kampong Cham Governor Kuoch Chamroeun said then that he would form a committee to help relocate villagers living along riverbanks to safer areas.