New real estate developments have been shooting up across Siem Reap over the past few years. Indeed, the Kingdom’s main tourist draw has seen a spate of new hotels, boutique accommodations, guest houses and apartments. Earlier this year Mario Tan, sales and marketing director of Hunter Estate, claimed the number of tourist-centric structures has surpassed 1,000. That is double what existed in the city just two years ago, he added.

It’s no surprise that the home of the Angkor Wat temple complex has seen such a massive demand for lodgings. According to Angkor Enterprise, the custodial organisation for the park, the number of visitors nearly hit 2.5 million in 2017.

Phin Vanna, CEO of Camglobe Realtor in Siem Reap, noted that larger hotels – those with more than 100 rooms – have seen a massive influx of Asian tourists, especially Chinese nationals.

“Boutiques, guesthouses and homestays have not grown as fast as large-scale hotels,” Mr Vanna said, adding that the number of Western visitors to the area has gone down by about 50 percent. The number of Chinese tourists, he claimed, has doubled in recent years. He mentioned that most groups from China come as a part of packaged tours.

Charles Evans, director of Siem Reap’s Cambodia Property Shop, said that the hospitality sector is still the main front in the area, and there is still untapped potential.

“There are many hotels featuring many rooms across the city. Last year, 30 new boutique hotels were built nearby Damnak pagoda. This brought hundreds of new rooms to the market,” he stressed.

Interestingly, Camglobe’s Mr Vanna claimed that, prior to July’s national election, investor interest in hotels saw a noticeable spike. Now, however, renter and buyer demand has flattened out. 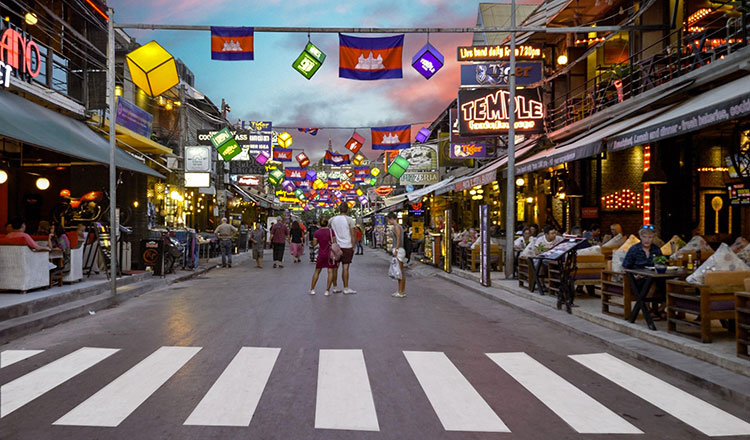 Mr Vanna, however, noted that majority [90 percent] of building owners prefer to sell the whole hotel rather than rent it out.

Of course, more options in Temple Town means more competition. Commenting on this, Mr Evans noted that some hotel owners who aren’t able to generate enough income are shifting their property over to long-term stays.

Choch Cho, founder and CEO of Siem Reap Property Services, echoed the claims that competition was getting more fierce as new hotels emerge in the city. Mr Cho explained that, although visitor numbers were on the rise, supply was still exceeding demand due to the number of new projects.

Growing competition isn’t the only challenge the sector is facing, either. Phy Sophov, general manager of Ring Boutique Hotel, said that owners need to stay in tune with the preferences of travellers. If they simply stick with the same business model, he said, they will fail.

Mr Sophov added that, despite growing numbers, the market is in the midst of a cooling down period. Large-scale luxury hotels have the most room for growth, he claimed.

“The market is still relatively strong and developers can profit as long as they bring something unique for their clients,” Mr Sophov pointed out.

Perhaps due to the falling number of Western visitors, many small boutique hotels have suffered or even closed over the past year. Mr Sophov’s Ring Boutique Hotel, however, has capitalised on the growing trend toward eco-friendly accomodations. It offers 22 rooms on a 1,425 square metre plot.

“We bring the unique feeling of living within the natural environment of Siem Reap,” Mr Sophov claimed. He added that they weren’t seeing as many foreign visitors, but domestic tourist numbers at the hotel were up by 70 percent.