Four lawyers representing former opposition leader Kem Sokha received death threats in a Facebook post a week after they issued a statement condemning a bet between Sam Rainsy and Prime Minister Hun Sen over how their client’s treason case would end.

The post, under the account of Mono Tep on November 22, showed a combination photo of the four lawyers, a pistol and a caption suggesting that those who slander former opposition leaders won’t have a better future.

It also carried a quote saying: “What Cambodian people want is the unification between Kem Sokha and Sam Rainsy, leading to change of dictatorship.”

The post drew the attention of the four lawyers, who shared it recently with the comment that this is the first time they have received a death threat through social media.

One of them, Chan Chen, yesterday said he was shocked by the intimidation but would stay calm and perform his work.

“It is the first time that we as co-defence lawyers of Mr Sokha have received a warning against our lives from an unidentified immoral person,” he said. “It’s so disappointing that such a thing can still happen in this age and time.” 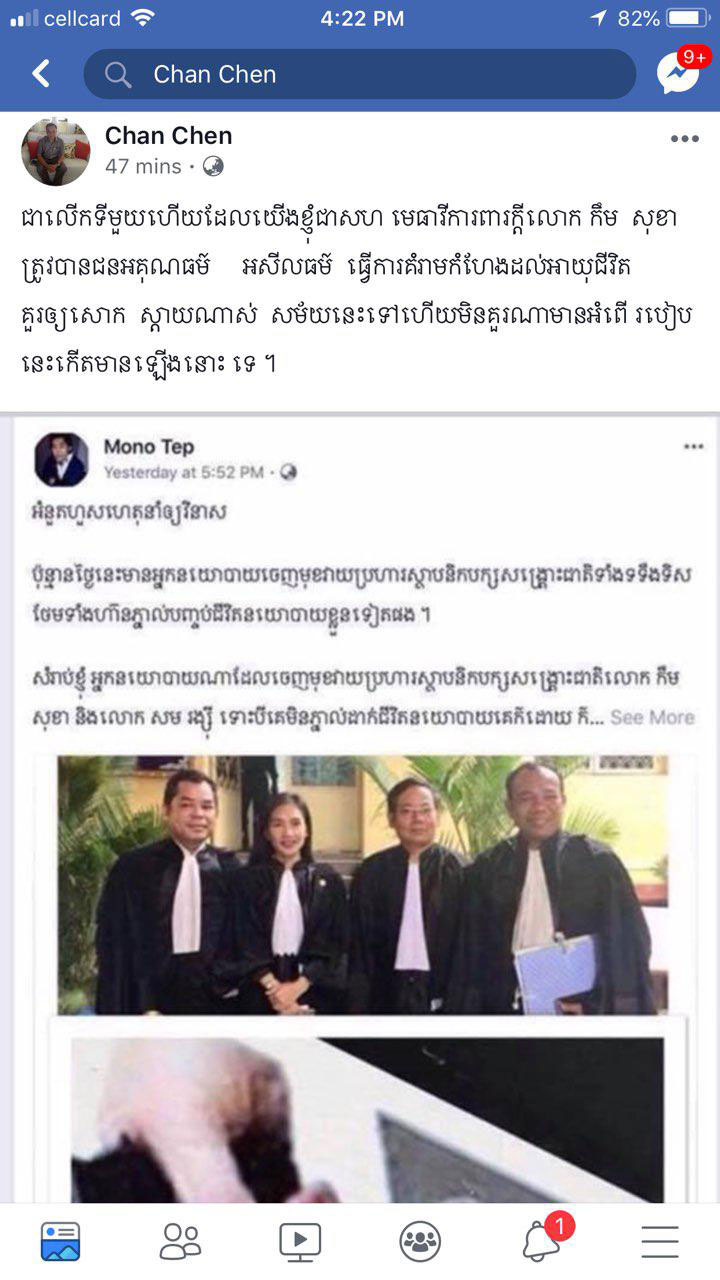 Mr Chen said the lawyers are trying to identify the person behind the post in order to file a complaint with the court, noting they suspect it is one of Mr Rainsy’s close confidantes who lives in France.

“I received information from a friend that Mono Tep is working for Mr Rainsy in France,” he said. “But I am not sure if his account was hacked and we are trying to gather more information.”

Another lawyer, Phan Chansak, said the post can be considered as an intention to commit crime, although it was posted on Facebook.

“We are checking all possibilities for our complaints,” he said. “We will request for security protection once we have enough evidence to show that our lives are in danger.”

“We checked his account and saw many photos he has taken with Mr Rainsy, but we will not assume that he is 100 percent Rainsy’s close confidante,” Mr Chansak added.

In a follow up post, Mono Tep rejected the allegation and challenged Facebook users to keep guessing what he meant by posting the photo and the message.

On November 10, the four lawyers issued a statement saying the “bet” between Mr Hun Sen and Mr Rainsy could “affect the procedure of the court” in Mr Sokha’s case.

They claimed that any decision to have his charges dropped came under the authority of the court and should not be the subject of a bet.