Longest boat on display in capital

The world’s longest dragon boat, which was showcased during the Water Festival last week, will now be put on display outside the National Museum for all to see.

Sar Sokha, head of the boat building committee, said yesterday that the boat, which earned a Guinness World Record earlier this month, is on display until the end of the month.

“The main purpose of the exhibition of this longest dragon boat is to give Cambodian people the opportunity after the Water Festival, especially for those who come to do exercise in the evening, to see the boat if they did not get the chance during the festival,” he said.

“The exhibition is open to the general public to see this amazing achievement of Cambodian people who created the longest boat in the world,” he added.

Mr Sokha added that the boat will next month return to the water and be brought home to Prey Veng province, where it was built.

He said that the boat will then be put on display in the province permanently once a museum is built in the Chong Pom area.“This world record was earned by Cambodian people using traditional methods to construct the boat, with tradition tools and materials,” he said. “It was hand-built and there were more than 13,000 people who participated to construct it. This is a proud achievement.”

Venerable Tes Sophat, 29, a monk in Phnom Penh, said yesterday outside the National Museum that he was excited to see the boat.

“When I first saw the boat, I felt really proud and could not believe that we could make it happen,” he said.

Yim Sopheap, 36, from Svay Rieng province, praised the boat as she looked at it outside the museum yesterday. 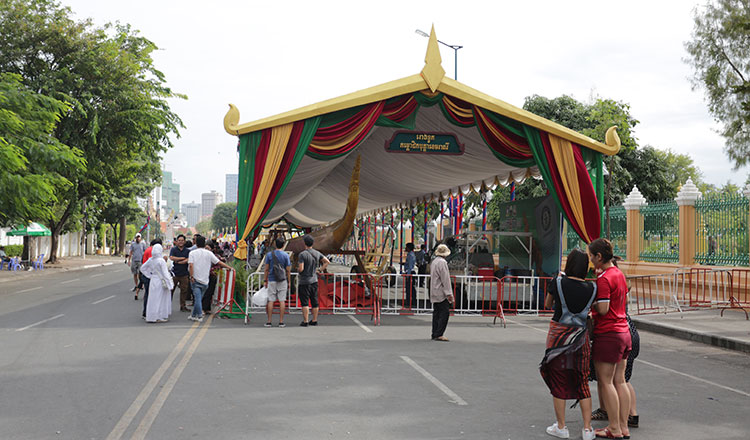 “This boat is extraordinary and I have never seen anything like it,” she said.

The boat, which is 87.3 meters long and 1.99 meters wide, officially earned a Guinness World Record on November 12, marking the fourth record Cambodia has set so far after it nabbed the longest krama scarf, biggest Madison dance and the largest sticky rice cake.

Meanwhile, the biggest Chapei Dang Veng made from plastic bottles is being put on display at a pagoda in Siem Reap province to mark the two-year anniversary of the traditional Khmer guitar being recognised as an intangible cultural heritage by Unesco.

Riem Monisilong, an artist who made the plastic Chapei Dang Veng, said yesterday that he spent one month to complete it and it will be displayed at Wat Bo.He said 6,000 plastic bottles were used to make the guitar, most of them collected from hotels, as well as 16,000 plastic straws which he collected from coffee shops.

“The Chapei Dang Veng is 6.5 meters long,” he said. “It has already been brought to the pagoda where a show will be put on to mark the Unesco listing.”

Mr Monisilong added that he constructed the plastic guitar to raise awareness amongst the public over recycling.

“I hope that this Chapei Dang Veng will send a message to everyone to reduce using plastic and to manage rubbish properly,” he said.

The guitar is being displayed during the Chapei Dang Veng Festival, co-organised by the Cambodian Living Arts and the Ministry of Culture and Fine Arts at the Heritage Hub in Siem Reap province from November 30 to December 2.