Prime Minister Hun Sen and outgoing US Ambassador William Heidt have pledged to enhance more cooperation between Cambodia and the United States.

The pledge was made during today’s meeting between Mr Hun Sen and Mr Heidt at Peace Palace.

Mr Heidt said that Cambodia and the US have agreed on multiple points and will continue to discuss more to iron out some disagreements, according to Mr Kim Hourn. 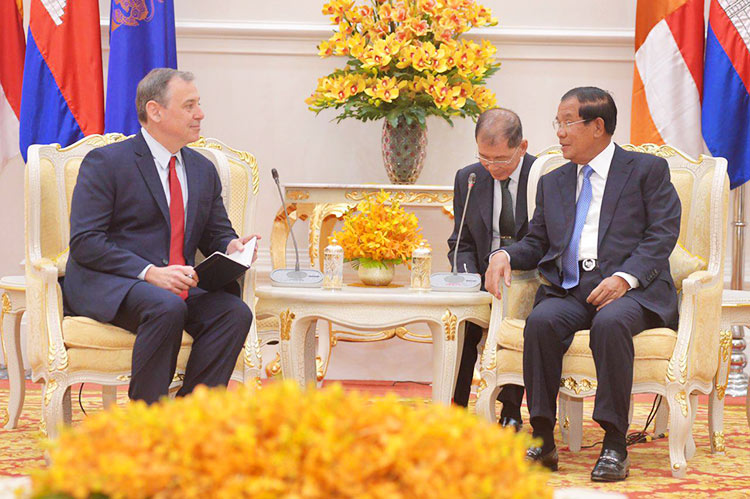 He said that Mr Heidt told the premier that bilateral relationship has been improved while Mr Hun Sen also confirmed that he wanted better relationship with the US counterpart.

He added that Mr Hun Sen also reiterated that the government will not allow any foreign military base to be built in Cambodia.

“We [the government] will not allow any foreign military base to be built in Cambodian territory,” Mr Kim Hourn quoted Mr Hun Sen as saying and the premier also asked the US not be concerned.

He added that Mr Hun Sen has also sent the letter to US Vice President Mike Pence regarding Cambodia’s stance, reaffirming that the constitution will not let any foreign navy, armed forces, or air forces to be stationed in the country.

Mr Kim Hourn said that Mr Heidt told the premier that on the international arena, the US and China have competed, especially related to trade war and seeking markets for their products.