An EU-funded eco-school in Svay Rieng province is paving the way to serve as an example for other schools across the Kingdom to remind students that they have a greater role to play in reducing climate change.

The province has seen the effects of climate change first hand including an increase in temperatures, droughts and erratic weather patterns in recent years.

In 2010, Kampong Samrong High School became the first school to receive financial support from the European Union and the Cambodia Climate Change Alliance to increase capacity building of students.

Chean Phearom, a Kampong Samrong High School student, said that the school teaches students to be mindful of their surroundings.

“The school taught us about climate change and how to reduce carbon dioxide,” Ms Phearom said. “We have been receiving new topics on nature since last year and we started growing trees and reminding people to dispose their rubbish properly.”

Nol Savun, the school’s director, said the school has made a lot of achievements since new subjects on nature were implemented.

“Before the students did not understand climate change and how harmful plastic bags can be,” Mr Savun said. “After we got the training, students and teachers have a more comprehensive understanding – and they promote what they learn here at the school to their relatives.” 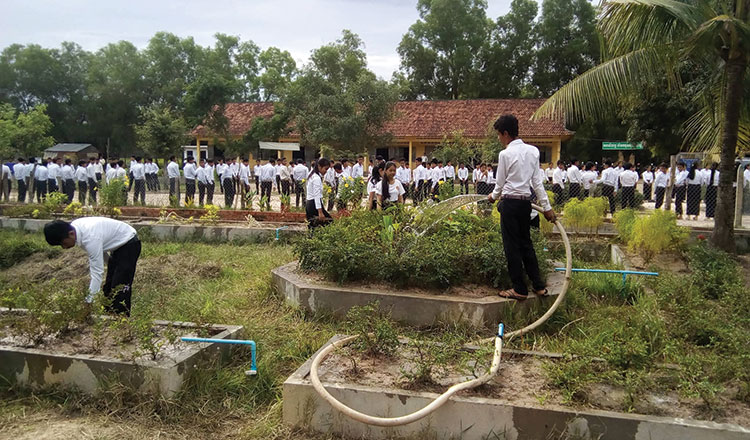 The Education Ministry in conjunction with the CCCA is also planning to implement a project called “Mainstreaming Climate Change in Education” to bring the issue of climate change to students in the provinces of Kampot, Svay Rieng, Kampong Chhnang and Stung Treng.

The ministry said that the objective of the project is to increase the understanding of secondary school students.

It said that a number of schools have received support to establish eco-clubs to lead environmental activities.

Chea Cheat, an undersecretary of state at the Education Ministry, said that it is imperative for the impacts of climate change to be taught in schools.

“Within three years, the concept of the project will permeate into school curriculums and books and students will be required to take an exam,” Mr Cheat said. “The lesson is important for all people so that they can understand about what climate change has done in countries like India and China.”

EU Ambassador George Edgar said that he was impressed with the students’ ability in learning about climate change.

“It is very interesting to see these activities inside the school. The students here formed an eco-club which has been responsible for planting vegetables,” Mr Edgar said. “It is also good to see the way climate change and environmental issues are being filled in school curriculum.”