Judge Nil Nonn said that Mr Chea, 92, former Deputy Secretary of the Communist Party of Kampuchea, and Mr Samphan, 87, former head of state, were sentenced to life in prison after being found guilty of executing ethnic Vietnamese and Cham, as well as committing rape, forced marriage and religious prohibition.

Judge Nonn said that both Mr Chea and Mr Samphan were of high positions in decision-making during Democratic Kampuchea rule as they were in charge of the government, policies and military forces.

“Nuon Chea is directly responsible for the crimes against humanity such as execution of Chams and other religious groups within the Communist Party of Kampuchea,” he said.

He said that Buddhism was banned and pagodas were shuttered, adding that hundreds of Buddhist monks were forcibly defrocked.

He added that people were also forced to marry.

The defence attorneys for Mr Chea and Mr Samphan said that they will appeal.

Cambodian lawyer Son Arun said that he was dissatisfied with the decision for his client Mr Chea.

“We will make further appeals until the last procedure,” Mr Arun said. “We will appeal soon.”

Kong Sam Onn, defence attorney for Mr Samphan, said the court failed to review lawyers’ submissions.“We, defence team for Khieu Samphan, were disappointed with the ruling,” Mr Sam Onn said. “I believe that Khieu Samphan will allow us to lodge an appeal.”

Mr Chea and Mr Samphan were already serving life imprisonment for the crimes against humanity in case 002/01, which concluded in 2014, and their first life sentences were merged with case 002/02.

Morn Mao, who travelled from Oddar Meanchey province to hear the verdict, said that he was happy with the judgement and felt relieved after waiting decades for justice.

Kim Khon, who came from Siem Reap province to hear the verdict, expressed dissatisfaction, noting the two ageing defendants could not live long enough to serve their life sentences.

“Only a few leaders were put on trial compared to the death of two million people. They are too old now,” Mr Khon said.

Cambodian co-prosecutor Chea Leang said that despite their sentences being merged, they had to serve life in prison.

“Normally, humans have only one life, so we cannot sentence them to life in prison twice,” Ms Leang said. “I think the victims will accept this verdict happily. I think it takes time, but it is a legacy for Cambodia and the world for those born in the regime.”

The trial of the case 002/02 was wider than the 2014 case, which was related to execution, genocide and other crimes applied by both international and domestic laws.

Japan, the largest donor for the tribunal, the United States and the United Nations welcomed the verdict, saying it was historic for Cambodians.

Stephane Dujarric, spokesman for the UN Secretary-General, said that the judgement demonstrated that perpetrators of the most heinous crimes can be held accountable, even decades after the crimes were committed. 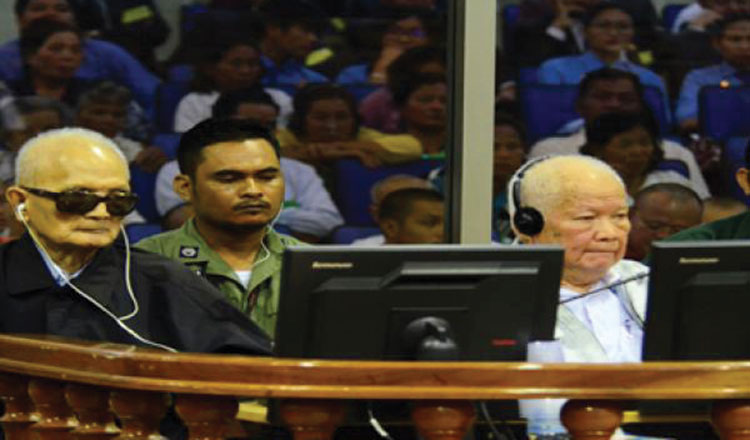 “The Secretary-General’s thoughts are with the victims of genocide, crimes against humanity and grave breaches of the 1949 Geneva Conventions for which the accused have both been found guilty,” he said.

The Extraordinary Chambers in the Courts of Cambodia, a joint establishment between the Cambodian government and the United Nations, has so far tried three senior leaders of the brutal regime and sentenced them to life imprisonment, including Kaing Guek Eav, alias Duch, who commanded S-21 torture centre.

Ieng Sary, the former foreign affairs minister and his wife Ieng Thirith, former social affairs minister, died in 2013 and 2015 while the top most senior leader Pol Pot died in 1998 before prosecution.