The Extraordinary Chambers in the Courts of Cambodia will today announce the verdict for case 002/02 regarding the roles of Nuon Chea and Khieu Samphan in the Khmer Rouge regime, ECCC spokesman Neth Pheaktra said yesterday.

During the trial of case 002/01 in 2014, both men were found guilty of crimes against humanity committed between April 1975 and December 1977 and were sentenced to life in prison by the tribunal.

Mr Pheaktra said yesterday during a meeting with about 700 government officials, monks, students and NGOs representatives that the tribunal will announce its judgement on case 002/02 today.

“This is another historical event for humanity and a new achievement for the ECCC,” he said, noting that hearings for case 002/02 were held from October 2014 to January last year.

The hearings detailed communication structures within the Democratic Kampuchea regime and the construction of security detention centres and execution sites across the country. 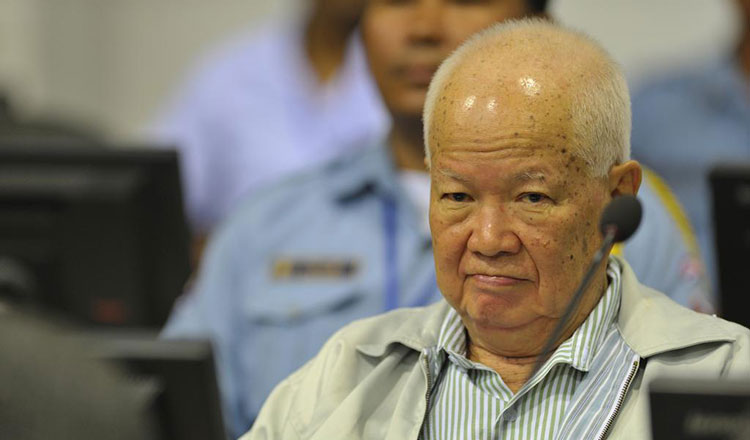 The tribunal also heard about the killings of Cham and Vietnamese ethnic minorities and the treatment of Buddhists and former Khmer Republic officials.

Kong Sam Onn, Mr Samphan’s attorney, yesterday said he will listen to the judgement today. Mr Sam Onn noted that his client was not responsible for the killings.

“He is not the main person responsible for the crimes against humanity and genocide,” he said. “I still request for the release of my client.”

Hong Kimsuon, a lawyer for the victims of the Khmer Rouge, said that Mr Chea and Mr Samphan must be held accountable for the crimes committed decades ago.

“I hope that the judges of the Khmer Rouge Tribunal will hold both men accountable,” Mr Kimsuon said.