From arts aficionado to Award Winner

The much-loved Nicolaus Mesterharm is no stranger to those in the arts scene and is best known as the person behind Meta House in Phnom Penh. Nico, as he is fondly referred to, was recently awarded the Cross of Merit of the Federal Republic of Germany. Anith Adilah Othman caught up with him recently.

Arts always seems to find itself in the middle of things. This time, it played an instrumental role in bridging the gap between two very different nations – Germany and Cambodia.

One of the key persons behind the various cultural exchanges through arts in Phnom Penh is Nicolaus Mesterharm, the founding director of the German-Cambodian Cultural Center Meta House. On November 1, Mesterharm’s arts-related efforts over the past 11 years were officially recognised by the German Embassy when he was presented the Cross of Merit of the Federal Republic of Germany Award.

The essence of the prestigious award is to honour those who go out of their way to do something that benefits the larger society, without any personal gains or profit in mind.

Mesterharm, who is also a former journalist, is no stranger to arts. The Hamburg-born has dabbled in theatre, writing, music, acting and even filmmaking since his early twenties. Reminiscing the days when the arts scene in Phnom Penh was even remotely close to what it is today, Mesterharm said the whole experience was not a walk in the park.

In 2007, the 51-year-old moved to the Cambodian capital and started Meta House on the down low. It began at his old house, which doubled up as a weekend party venue.

“The aim of this center was never to show arts for arts’ sake. This is a neutral place to address pressing social issues,” he told Good Times2 in an interview at his office, on the top floor of Meta House.

“At first, it was more like a party thing. My wife and I would open our doors to receive our friends and guests, where we’d watch and have dialogues on films on the weekends.

“Initially, there was no acknowledgement from the officials so we had to work hard to slowly buy more equipment to furnish our dream space. 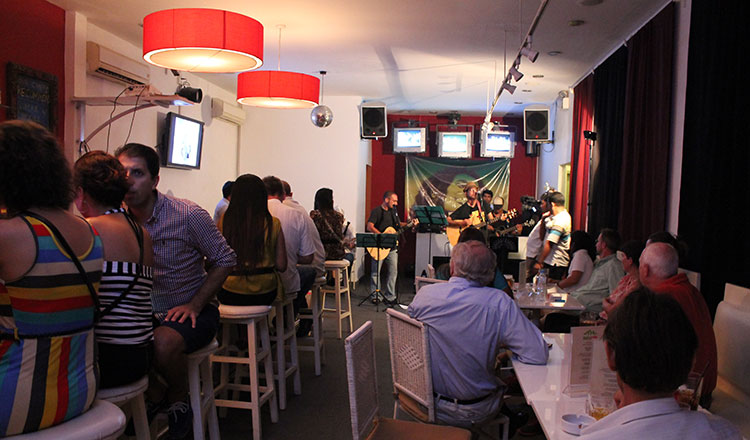 “Now, it has turned into a full-fledged six-day programme at this very place,” he said, referring to the triple storey building on Samdech Sothearos Boulevard.

Mesterharm, who married a local filmmaker and is a father of two, has a solid reason why he is adamant on bringing changes to the Kingdom – his family.

“I am not doing this for money or for the recognition. Running Meta House does not give me a director’s salary, so be it. Other people buy themselves a sports car but not me. I do it out of my affection towards this city.

“I want to make Cambodia a better, nicer place because my children will grow up and live here. I may never be a Cambodian, but my children are,” he said.

Delving deeper into his own relationship with Phnom Penh, Mesterharm said he has learned a lot from the day he first stepped foot in the city.

“When I first got here, Phnom Penh was not an attractive place. It was dark, smelly; there were slums everywhere and the people could not speak English. Suffice to say that it was not at all appealing.

“But I stayed because it taught me something that no classroom could have. I realised that back home in Germany, I was privileged.

“I was born in an upper-middle class family. I had enough food in my fridge, I had running electricity and I didn’t miss out on anything. Of course, my parents were always talking about the war but I couldn’t relate to it. When I got here, I had to redefine ‘poverty’.

“I also learned something else. Poor people who are in constant hunger can be happy too. It truly opened my eyes,” he said.

Despite his hard-looking exterior, Mesterharm is a humble man who has only nice things to say about his small team that helps him run Meta House daily. He even dedicated the medal to them.

“This prize goes to everybody who has helped with Meta House since the very beginning. If not for the help, especially Cambodian friends I met along the way, I would have never got to where I am today.

“I believe that we all create some sort of loose network with people we meet on the daily, it’s what we make out of it that matters,” he said.

Now, Mesterharm works closely with the Cambodian government, with the support of the German Embassy, for multiple outreach programmes, enlightening the youths in the rural areas on important matters such as underage drinking and child marriages.

“We realise that an arts and cultural center can only reach a certain number of people. The only way to bring about major changes is to be involved in the education system. For the past four years, we have possibly reached out to over 67,000 students,” he said, beaming with pride.

“Questions like ‘is arts education necessary’ arose and my answer to that is…arts is not vital but it broadens your horizons. If you are forced to only repeat what your teachers tell you, you can’t be creative,” he said.

“What holds most young Cambodians back is not stupidity or inability but lack of education. So what we are doing would complement what’s already there.”

Since 2015, Mesterharm has been actively involved in an educational play called “The Courageous Turtle” which is performed at schools in the provinces to teach the youths about the history of the Khmer Rouge.

Today, Meta House’s event calendar is almost always filled up with multitudes of events such as photography exhibitions, documentary nights, talks and even DJ parties.

However, Mesterharm said he has no intention to turn his brainchild into a purely commercial space.

“We only do things that we believe in. Anyone who is interested to start a dialogue on pressing issues, arts, or literally anything is welcomed here. It is a safe space.

“Yes, we have a few parties occasionally here but that is how we have our fun amidst the more serious stuff,” he said.