Asean and China yesterday issued a joint-statement at the 21th Asean-China Summit which designated 2019 as the Asean-China Media Exchange Year.

In a speech at the summit yesterday, Mr Hun Sen said that the media exchange initiative will help to strengthen cooperation and relationships between the regional grouping and China.

He noted that Cambodia will continue to work closely with Asean member states and China to increase cooperation in areas such as trade, investment and tourism.

“Cambodia welcomes the declaration of 2019 as Asean-China Media Exchange Year, and hopes that Asean member states and China will give priority to implement activities and other projects related to media sector,” Mr Hun Sen said. 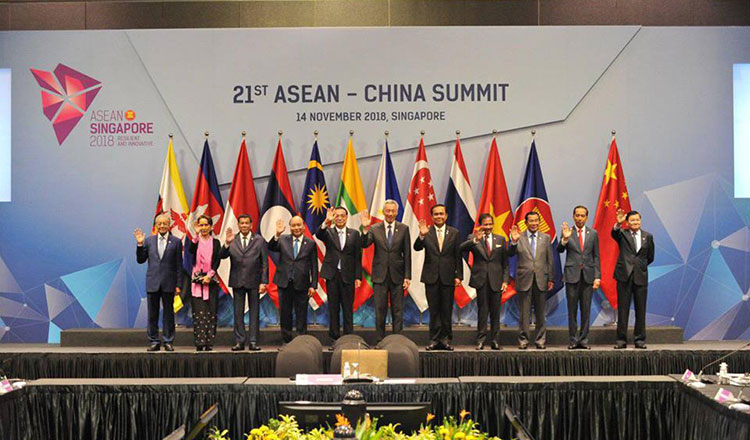 He added that the media exchange is aimed at promoting awareness about cooperation between Asean and China in all sectors, noting that it will also help build people to people trust and friendship in all countries involved.

“Cambodia strongly believes that China is a strategic partner of Asean, in any circumstance, and hopes that this relationship will continue in the spirit of common interests and sustainable development for all nations,” Mr Hun Sen said.

The Prime Minister flew to Singapore on Tuesday to attend the Asean summit, and also an Asean-Korea summit.

At the Asean-Korea summit, Mr Hun Sen reiterated Cambodia’s support for recent summits between the US and North Korea and meetings between North Korean leader Kim Jong-un and South Korean President Moon Jae-in.

Mr Hun Sen noted that these meetings are ways to move forward to build permanent peace and win-win cooperation leading to the denuclearization of the Korean peninsula.