Authorities in Kampong Cham province are attempting to minimise the effects of drought in the province.

The drought has affected more than 10,000 hectares of rice fields in five districts since the beginning of the month.

Om Vibol, director of the provincial water resources department, said for the past ten days officials have been attempting to salvage 15,311-hectares of rice fields by pumping water to them. 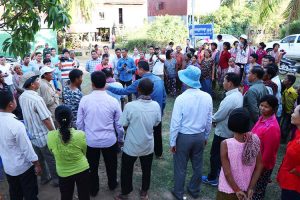 “Officials are using three water machines to pump water for fields in some of the hardest-hit areas,” Mr Vibol said. “The districts of Prey Chhor and Kampong Siem were hit the hardest in the province.”