Home - UN envoy calls for Sokha’s charges to be dropped

UN envoy calls for Sokha’s charges to be dropped

The UN Special Rapporteur on Human Rights in Cambodia yesterday called on the courts to drop treason charges against Kem Sokha, or speed up his case and lift his restrictive bail conditions.

UN envoy Rhona Smith yesterday concluded her latest mission to the Kingdom and held a press conference to discuss her work.

She said that she remains concerned over Mr Sokha’s freedom as he remains under court supervision while awaiting trial on treason charges for allegedly colluding with the United States to overthrow the government.

“I call for the release of Kem Sokha from restrictive detention and for the swift conclusion of the investigation in his case to ensure that his right to a trial is within a reasonable timeline based on a clear and transparent evolution of the evidence, or for the charges to be dropped,” Ms Smith said.

Government spokesman Phay Siphan said neither the government nor Prime Minister Hun Sen has authority to interfere in the Kingdom’s judiciary proceedings.

“Only once a verdict has been announced can Prime Minister Hun Sen authorise a request for a royal pardon,” Mr Siphan said. “I understand Rhona Smith loves Cambodia, but she should know that Cambodia is now at peace.” 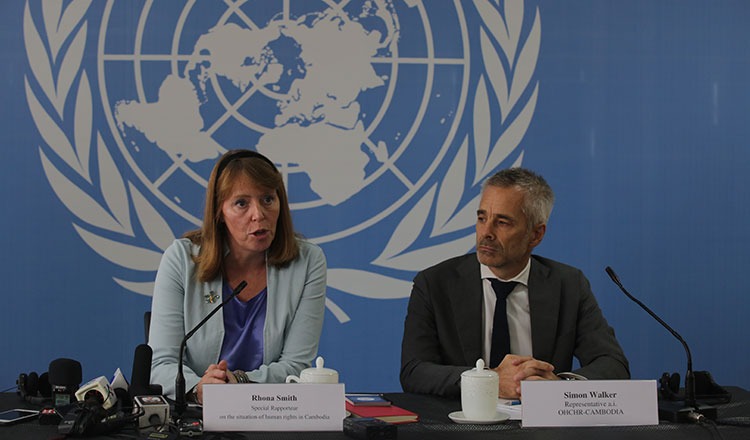 Ms Smith also called for land activist Tep Vanny’s criminal record to be expunged and for charges against human rights workers to be dropped, specifically the Adhoc 5.

Ms Smith cited a range of meetings she had with government officials, representatives of NGOs, political parties and members of the diplomatic community.

She lauded the government’s effort to create a working group to address problems NGOs face when conducting field work.

“I encourage both sides to build a truly collaborative spirit. Civil society organisations will need to be reassured that they can actively and meaningfully collaborate with the working group without fear of reprisal, including at the local level,” Ms Smith said.

“While I have visited many relocation sites in Cambodia, often connected with Economic Land Concessions, this is the first time I have visited a site on reclaimed land where a community is moving onto land,” she said. “Concerns expressed by people from floating communities during my field trip echoed those heard during past missions as well as those contained in several petitions I received over the past ten days concerning land rights.”

Ms Smith noted that in January, Cambodia will undergo its third Universal Periodic Review of its human rights performance before the UN Human Rights Council in Geneva.