Germany has approved about $570,000 in additional aid for demining operations in the country for the remainder of the year, bringing its total contributing for 2018 to about $1.7 million.

According to a statement from the German embassy, the German government granted the additional aid to the Halo Trust demining organisation earlier this week.

German Ambassador to Cambodia Ingo Karsten said that mines are an agonising legacy that continue to impede the Kingdom’s development.

“We – the Royal Government and international partners – need to step up our efforts to achieve the goal to declare Cambodia mine-free by 2025,” he said. “Germany is committed to continue supporting mine clearance activities in the country toward this goal.”

The statement added that almost 300 deminers are clearing minefields under the support of the German government, and more than 100,000 Cambodians have received benefits from the work since 2015.

“Germany will continue to work with Halo Trust so that in 2025 no parent has to worry anymore about their children being harmed by mines,” the statement said, adding that since 1994, Germany has contributed $26.2 million for mine clearance activities in Cambodia. 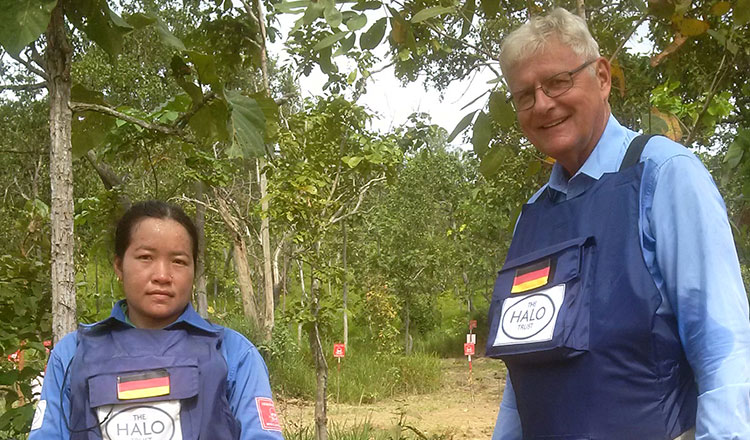 According to a Cambodian Mine Action and Victim Assistance Authority report, more than 1,700 square kilometres of land has been cleared since 1992. In 25 years of work, deminers have cleared 1,036,376 anti-personnel mines.

Ly Thuch, a vice president of CMAA, expressed gratitude for the extra support.

“On behalf of the government, we would like to say thanks to the German government and people who provided additional funds for mine clearance in Cambodia and contribute to saving Cambodian lives,” he said

Mr Thuch said more than 600 square kilometres remain strewn with anti-personnel and anti-tank landmines in the country, with most in the provinces along the border with Thailand.

“We will use the aid and resources to clear those landmines and release the land,” he said.

UN envoy calls for Sokha’s charges to be dropped

National IDs to expire by end of year