Located in the upper reaches of the famed Yellow River, northwest China’s Gansu province is well known as home of grottoes art, cultural heritage sites, magnificent natural scenery and also the key area of the ancient Silk Road route, which was the most important trading hub connecting China and western countries. Ros Chanveasna travelled with other journalists from 24 different countries to China’s Gansu province.

With excitement and enthusiasm, my media colleagues and I embarked on a five-day media tour to Gansu province. We all knew that the province is famous for its cultural richness. But as we moved from one place to another, Gansu proved to be more than just historical and cultural. It was, to say the least, vital to the greatness China presently enjoys.

A five-day media tour to Gansu province is blessed with abundant and diversified tourism resources. A lot of totally different profound natural and cultural heritage wonders can be seen here, including Mingsha Mountain, crescent-like spring, the world-famous Mogao Grottoes, which are spots of natural beauty in the Gobi Desert, Tibetan Buddhist monasteries, etc.

Our first city of destination was Dunhuang City, situated in the western end of the Hexi Corridor in Gansu province. It is the city with the most abundant historical heritage and clearest cultural memory of the Silk Road.

During ancient times, Dunhaung was a famous and important town on the ancient Silk Road, not only has it been a religious point but it has been a major cultural site as well.

What made Mingsha Mountain famous is how it makes loud sounds that can be heard in the city. The sands on top slide downward, collapsing with the skiing tourists and thus, causing the mountain to echo.

Looking downward, the Crescent Lake is a sight to behold. The lake sits on a remarkable desert, surrounded by the sands from the Mingsha Mountain. But the lake never seems to drain, with the water crystal clear all year round.

With over a thousand camels in the area, a camel back ride is surely the best way to experience the Mingsha Mountain and the Crescent Lake. Such ride gives tourists both the sense of adventure and the feeling of nostalgia of an era written down on history.

During the ancient time, camels were very useful in providing people a way to transport commodities and aliments along the path of the iconic Silk Road, where exchanges of commercial goods between countries transpired.

Then, the journey continued to the famed Mogao Grottoes, also known as the Thousand Buddha Caves, situated 25 kilometers southeast of downtown Dunhuang City. The sacred place is one of the largest-scale treasure houses and well-preserved sites of Buddhist arts in the world.

The 1,600-year-old Mogao Caves features a massive collection of Buddhist artworks and painted sculptures – more than 2,400 painted sculptures and 45,000 square meters of frescoes in 735 caves carved along a sandstone cliff by the ancient worshippers, the earliest dating back to 366 AD.

It was China’s first UNESCO World Heritage Site. Mogao caves was named as “world cultural treasury of art” in December 1987.

Our local tour guide, who has worked at the caves for years, explained the historical significance and how ancient Chinese worshippers designed the sculptures and wall paintings, and carved grottoes along the sandstone cliff.

“Each cave has thousands of figures on its walls, mostly reflecting Buddhist stories and history,” she said, adding that camera or flash photography are not permitted inside the caves because it would damage the frescoes.

Outside the caves are eaves of temples and gallery roads. Therefore, the Mogao Caves represent the Buddhist culture with an integration of stone caves, coloured sculptures and frescoes.

But as the number of tourists visiting the area has risen dramatically in the recent years, the Chinese government set up a new measure to control tourist flow to prevent damages to the caves’ historical and religious features. The Mogao Caves now limit to 6,000 tourists a day, in a bid to protect the frescoes inside.

Last year, the caves received about 2 million tourists, most of them Chinese nationals. Japanese tourists ranked first among foreign visitors.

Dunhuang is not only a cultural treasure house of the Chinese civilisation but also a common cultural and art center of all human beings, like a pearl on the desert of the western China. The city has become the permanent venue of the Silk Road International Cultural Expo, which has embraced another important opportunity for prosperity and development of its cultural industry, expanding new channels for its foreign cultural exchange and cooperation.

Lin Duo, secretary of communist party of China of Gansu provincial committee, said that Dunhuang is an important symbol of the integration of eastern and western civilisations, and has also played a significant role in promoting cultural exchanges and sustainable development among countries involved in China’s Belt and Road Initiative (BRI).

Mr Lin added, “We need to take over the historical responsible to extend cultural exchange along the BRI countries.”

Gannan Tibetan Autonomous Prefecture is China’s most attractive destination for plateau eco-tourism, located in the southwest part of Gansu province. With the integration of grassland and farming cultures, the interaction of Tibetan and Chinese cultures, the beautiful natural scenery, numerous relics, rich ethnic culture and tourism resources, Gannan is place of wonder.

Along the journey, we were able to catch a glimpse of yaks and sheeps eating grass all over the grassland area. Not only that, we also saw beautiful Tibetan villages in traditional styles along the mountain.

Walking around the monastery, we had a view of the compound where multiple architectures of Tibetan and Chinese styles abound, creating a beautiful and unique landscape.

A Tibetan monk at Labrang monastery named Venerable Tongnyi, who speaks fluent English, introduced us to his monastery. He shared that as one of the six great monasteries of the Gelug Sect of Tibetan Buddhism in China, it is known as the “world-famous Tibetan Buddhism Educational Institute”, which runs six colleges of Exoteric and Esoteric Buddhism, the Philosophical College, Lower Tantric College, Upper Tantric College, Medical College, College of the Wheel of Time and Hevajra College.

A huge collection of Buddha statues, murals, ancient conferment documents and religious artifacts can be seen inside the halls and the complex of temples at the monastery.

Ven. Tongnyi added, “This monastery comprises a complex of 108 subordinating monasteries and 8 parishes and there are nearly 1,000 Tibetan monks living and studying about Buddhism there.” 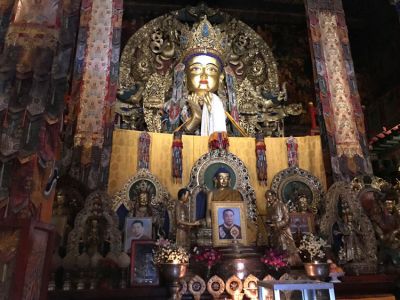 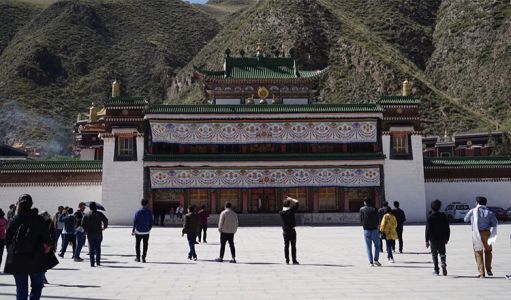 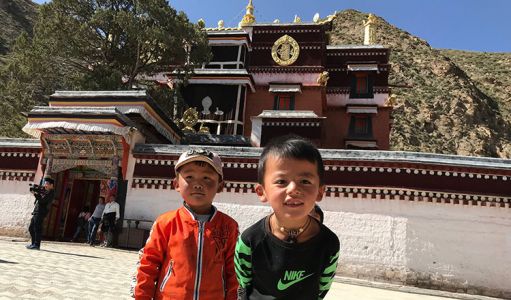 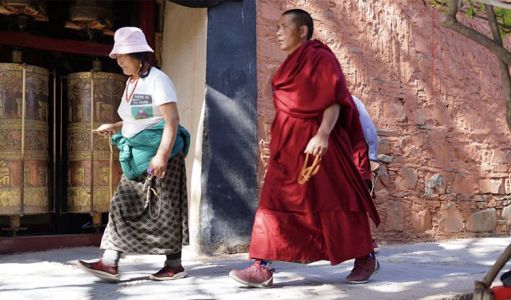 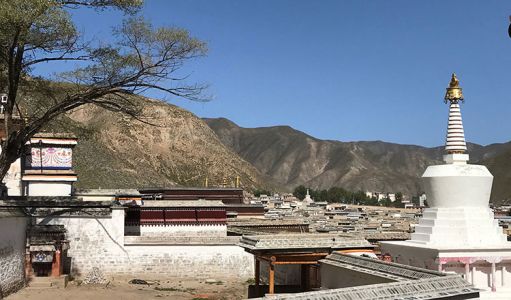 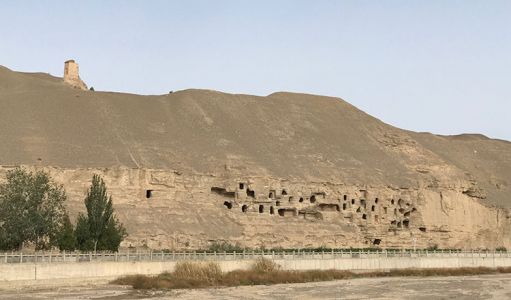 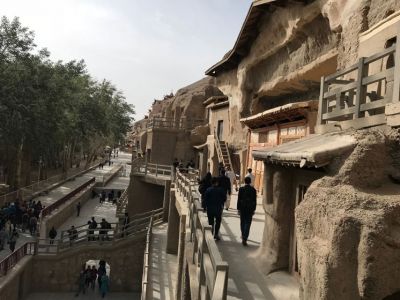 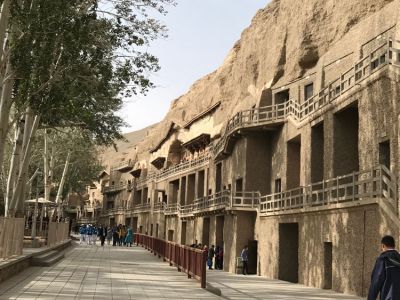 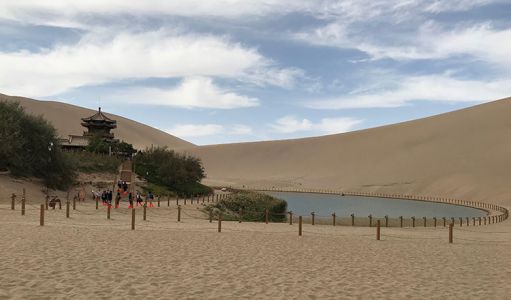