Six years in the making, the Regional Comprehensive Economic Partnership (RCEP) is slated to become an Asean-centric, comprehensive free trade area. Its 16 negotiating parties are racing to reach a ‘substantial conclusion’ by the Asean summit of mid-November 2018. But even if this deadline is not met, RCEP is poised to make a larger contribution to Asian and global economic cooperation.

RCEP may well become the second major Asia-led trade agreement in the wake of US President Donald Trump’s exit from the Trans-Pacific Partnership (TPP) in 2017. The remaining 11 TPP members renamed the TPP the Comprehensive Progressive Trans-Pacific Partnership (CPTPP), kept its contents largely intact, and signed it in March 2018. The CPTPP will take effect on 30 December 2018. RCEP is also converging on an agreement, but the chances for clinching the deal this year are receding.

Once completed, RCEP will offer a powerful boost to the rules-based global trading system. It will be a free trade area for the record books — huge in population and output (covering 3.6 billion people and a GDP of $25 trillion, exceeding that of the United States) and the most ambitious ever negotiated by developing countries. It will encompass first-ever agreements among China, India, Japan and South Korea, building upon commitments in the World Trade Organization (WTO), and offer new evidence of Asian leadership in world trade.

But it won’t be easy to get there. Only four of 21 chapters had been finalised following the mid-October 2018 negotiations in Singapore. Little progress was made on long-standing issues such as India’s unambitious tariff offers, India’s demand for freer movement of temporary service workers, and disagreements about investment and intellectual property rules. Nor did much emerge from the late-October negotiations in Auckland. The obstacles seem too numerous and large to be overcome in less than a month’s time.

The US–China trade war complicates RCEP negotiations. On the plus side, many Asian countries appreciate the need for strong coalitions to counter US bullying. Also, a ‘poison pill’ clause introduced by the United States in the United States-Mexico-Canada Agreement (USMCA) precludes members of this and other potential US agreements from also signing accords with ‘non-market economies’ (read China), adding urgency to completing RCEP.

Some are worried that US attacks on China will shift Chinese exports towards their own markets. Meanwhile, countries like Vietnam and India may benefit from greater access to US markets that Chinese exporters now control. The sheer uncertainty caused by the first major trade war since the Great Depression makes countries reluctant to enter long-term commitments. 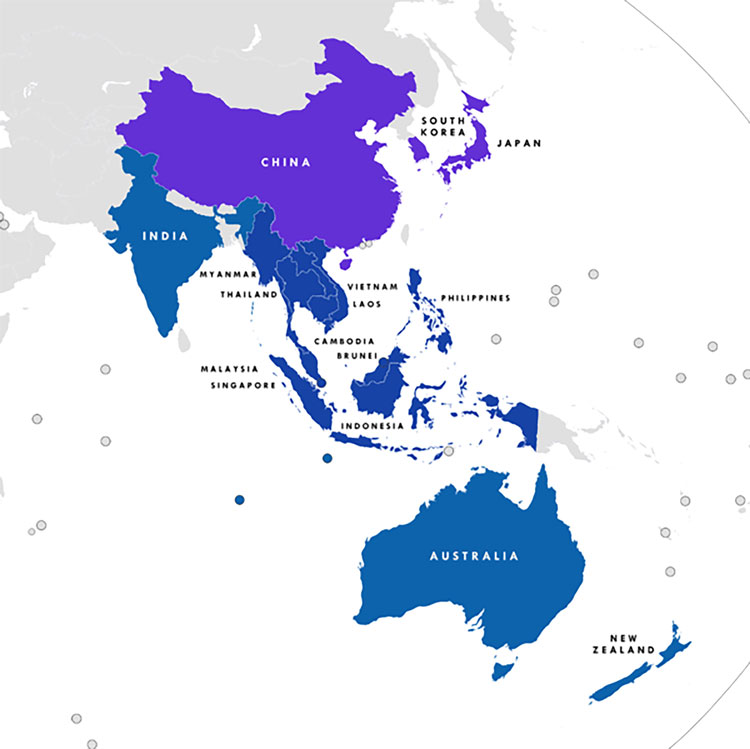 All this should not derail RCEP. Its economic effects are expected to be substantial, if smaller than those of a best-practice free trade area. Much will depend on the template that emerges, but signs are that RCEP will fall short of the CPTPP. In RCEP, some countries may reduce only 80 per cent of tariff lines with long phase-out periods, versus close to 100 per cent in the CPTPP. RCEP is also likely to have limited effect on non-tariff and non-border measures, or on intellectual property and service rules beyond those of the WTO.

RCEP will increase global real incomes by an estimated $286 billion per year (about 0.2 per cent of global GDP) once the agreement is fully in place in 2030. Absolute gains will be almost twice as large as those from the CPTPP due to RCEP’s greater scale. These gains represent a permanent upward shift in real income and make RCEP equivalent to a $7.2 trillion investment that returns 4 per cent per annum.

Global trade is expected to increase by 1.9 per cent with RCEP. Trade diversion (in which trade shifts from more to less efficient exporters because of trade discrimination) is estimated to be small. Some non-members may in fact benefit due to the multilateral nature of the liberalisation that RCEP requires and spillovers from members’ increased productivity.

The CPTPP is a natural benchmark for RCEP. The CPTPP adopts the original text of the TPP, minus 22 provisions that were suspended. While the CPTPP is expected to fall short of RCEP in absolute income gains, it will offer greater benefits relative to the GDP of its members. If the CPTPP adds members — as is likely — its benefits could overtake those of RCEP and exert pressure on RCEP for more rigorous rules and market access commitments.

The CPTPP is already playing a constructive global role. Its provisions — addressing dramatic changes in the structure of trade in the 25 years since the Uruguay Round of multilateral trade negotiations — are being adopted in other agreements, including the recent USMCA. The quality of RCEP will also benefit as CPTPP provisions inform its negotiations. Australia and New Zealand are reportedly calling for importing various CPTPP rules into RCEP.

As the world navigates the threat of a major trade war, the case for trade — as an engine of development and catalyst for economic reform — is under siege. The WTO’s Doha Development Agenda is moribund and populism in the Americas and Europe espouses nationalistic, mercantilist policies. RCEP can offer an optimistic answer: a developing-country-centric, pro-integration alternative on an unprecedented scale.

RCEP might even rekindle interest in broader regional integration, as an Asia-Pacific Economic Cooperation (APEC) pathway to a Free Trade Area of the Asia Pacific. That project would have huge economic benefits, potentially worth trillions of US dollars.

Washington divided: What next?