Prime Minister Hun Sen yesterday lashed out against former opposition leader Sam Rainsy for circulating a statement that the former would release Kem Sokha by the end of December to avoid international sanctions.

“Sam Rainsy is good at telling lies. Let’s wait and see how he cheated his followers. Kem Sokha hasn’t even been tried, how can anyone seek a royal pardon for him? You have no idea what the law is about,” Mr Hun Sen said in front of thousands of garment workers in Takeo province.

He noted that only the King is able to grant royal pardons and only after an accused is sentenced by a court.

Mr Hun Sen noted that Mr Rainsy has lied many times in the past, most recently when he claimed that the Prime Minister would not be able to travel to the United States and that the United Nations would withdraw Cambodia’s seat at the Human Rights Council.

“Sam Rainsy is stressed out, I guess,” Mr Hun Sen said. “He must have posted the lies in order to receive more likes. Let’s see how long you can lie for.” 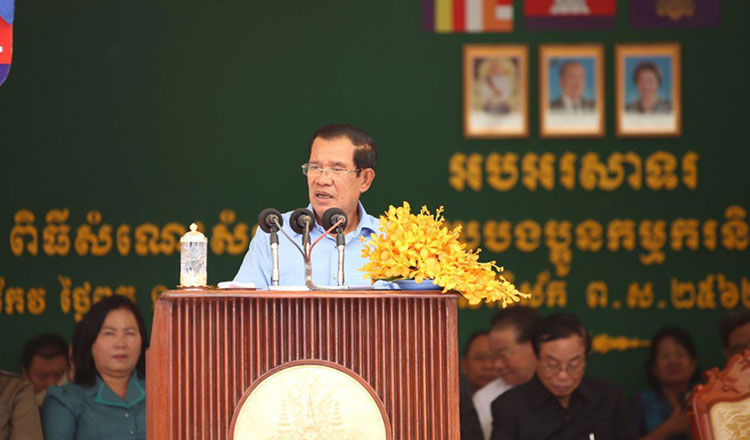 On Tuesday, Mr Rainsy said on Facebook that he obtained leaked information from an unnamed CPP official that Mr Sokha would be released on December 29 to mark Win-Win Policy Day.

“The release of Kem Sokha is a result of international pressure and it is Hun Sen’s first step to avoid EU sanctions,” Mr Rainsy said. “The second step Hun Sen is considering now is the reinstatement of the CNRP.”

Mr Sokha spent a year behind bars on treason charges before he was released on bail and placed under court supervision in September.

His bail conditions include travel restrictions and confining him to a four-block radius surrounding his home in Phnom Penh.

Requests made by Mr Sokha’s lawyer to pursue overseas medical treatment were rejected by a judge.