A European Union delegation on Tuesday visited a fishing community in Svay Rieng province to observe a project aimed at helping them deal with illegal fishing, rear fish, and farm without using chemicals in Peam Ro district.

The community project in the district’s Baborng commune is partly funded by the EU through the Agriculture Technology and Social Action Organisation and covers an area of 2,600 hectares and involves 335 fishermen.

The funding is used to educate the villagers against fishing illegally, how to feed the fish they rear and on the use of modern farming techniques to supplement their incomes.

Before the project, community leaders noted that illegal fishing was widespread and they lacked the skills or knowhow to convince villagers to stop the activity.

Pan Sodavy, Agriculture Technology and Social Action Organization acting director, said that the EU funding benefited the community in many ways including establishing community patrolling to stop illegal fishing and teaching them how to grow mushrooms for additional income.

“First, we help them to demarcate community boundaries by putting up posts so that villagers do not trespass on privately-owned land,” he said. “We also teach them farming techniques to grow vegetables.”

“The income they get from the fishing is very limited, so we encourage them to grow vegetables and rear fish. The EU provides 80 percent of funding for these activities and we provide the remainder,” Ms Sodavy added. 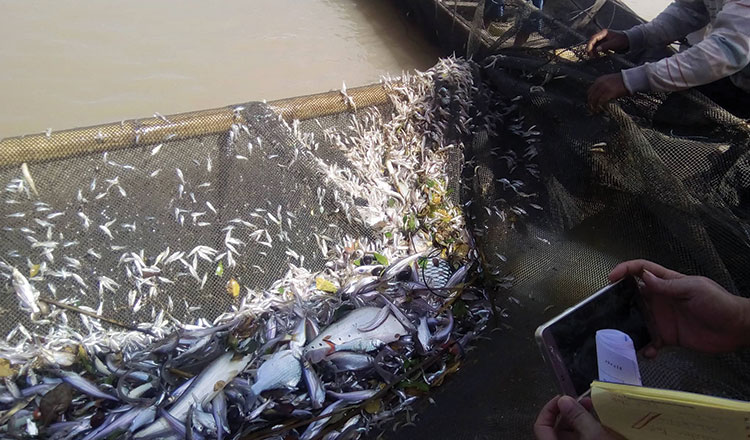 Srung Limsong, deputy director-general of the Fisheries Administration, said that the project is important to help stem illegal fishing.

“Without the community’s cooperation, the commune will be plagued by illegal fishing and the project also brings benefits to the fishing community there,” he said.

According to the EU, the main focus of the project in Baborng is to improve the management skills of commune leaders and educate them on their roles and responsibilities.

It noted that the objective is to improve fish conservation by combating illegal fishing, and help generate more income for fishermen through aquaculture and mushroom farming.

Kim Thoeun, 47, a community leader, said that he goes on regular patrols to crack down on the illegal fishing by villagers and outsiders.

“I go on patrols with a team and we seize the illegal fishing equipment and educate those who own them not to fish illegally,” he said. “We patrol three to four times per month during daylight because it is dangerous for us to do so at night.”

“We face verbal abuse from offenders but there has been no violence so far since the majority of them are from the commune,” Mr Thoeun added.