The United Arab Emirates yesterday announced it will give Cambodia $500 million in credit to buy and import products from the emirates.

The announcement was made in a meeting between Prime Minister Hun Sen and Sheikh Ahmed Bin Dalmook Juma Al Maktoum, chairman of AMERI Group of companies and a member of the UAE ruling royal family, at the Peace Palace.

Mr Hun Sen’s assistant Eang Sophalleth told reporters after the meeting that Sheikh Ahmed said he will extend a credit line of $500 million to Cambodia.

“This credit line will be used to import goods from the UAE,” he said, adding that the imports will be based on Cambodia’s needs.

Mr Sophalleth noted that a credit line is similar to a loan and after Cambodia uses it to buy products and import them into the country, it will have to repay the amount.

“They have money. When we want to buy anything, we can use that money, and then we compensate them,” he said. 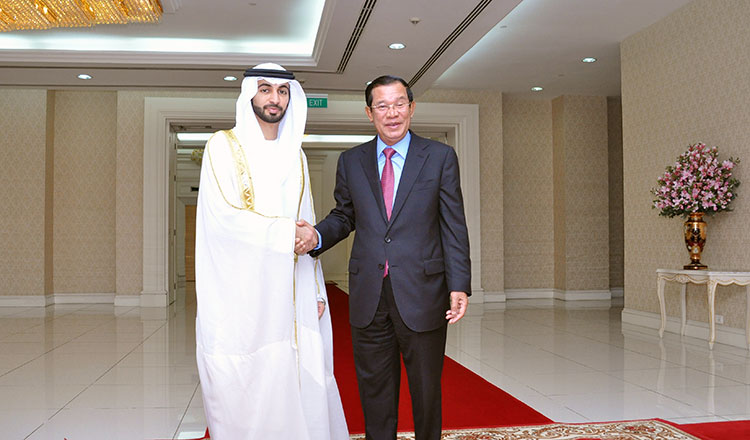 Mr Sophalleth added that the Prime Minster expressed his gratitude for the credit line, and noted that so far the UAE has helped Cambodia to build human resources and also an orphanage.

Mr Hun Sen instructed Sheikh Ahmed to speak with relevant ministries to discuss what the credit line should be used for.

In the meeting, Sheikh Ahmed expressed interest in investing in the gas, trade and financing sectors in Cambodia, and noted that he will also study other sectors.

The Prime Minister welcomed the plan to invest in the gas sector and accepted an invitation to pay an official visit to the UAE, noting that that he will find a suitable time to do so.

Mr Hun Sen said investment in the gas sector will help to reduce logging for firewood, and contribute toward protecting Cambodia’s natural resources.

Mr Sophalleth noted that Sheikh Ahmed is interested in producing and supplying gas for Cambodia’s market and Mr Hun Sen advised him to work with the Energy Ministry.