About 600 people from six provinces yesterday gathered to submit petitions to the National Assembly, Prime Minister Hun Sen’s cabinet and relevant ministries in Phnom Penh as they seek resolutions to land disputes.

However, authorities blocked the group as it attempted to hand-deliver the petitions and diverted people to Freedom Park while also loading some onto trucks for a ride back to their home provinces.

Yous Sophorn, a representative of people from Svay Rieng province, said that their land dispute involves 120 families and the Ministry of Water Resources and Meteorology over 99 hectares of land.

“We came to Phnom Penh to follow up on when they will settle the dispute and provide compensation to us,” she said. “We were told on Monday not to grow rice on the land.”

Cheav Chantha, from Tboung Khmum province’s Memot district, said 665 families there have a land dispute with a rubber plantation company.

“We have lived on the land for a long time, and we are happy to live on the land,” she said. “So, please let us live happily.” 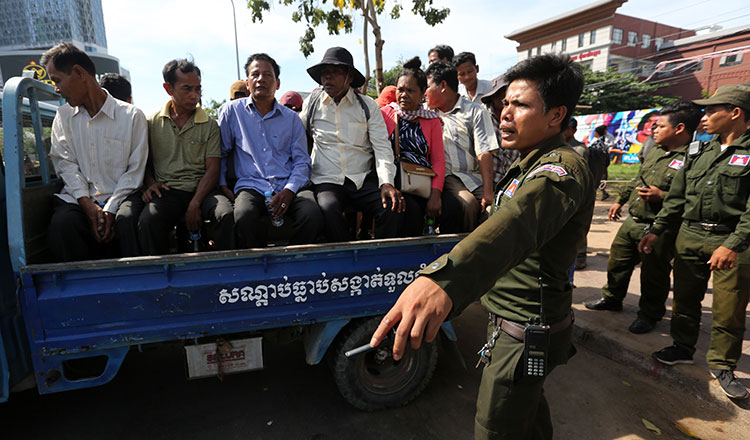 She noted many of the 665 families were already given land, but 49 were moved to a separate location on smaller land plots and wish to return to their old homes.

In addition to land issues, the group was also seeking the release of four people behind bars in Preah Sihanouk province and for charges to be dropped against another 12. The court cases are related to land disputes there.

“The people cannot gather here,” he said. “They are organising a national festival. Tomorrow, they will rehearse a procession for a ceremony, so people cannot walk to submit a petition like this.”

Sar Chamrong, from the National Assembly’s Commission on Human Rights, said the petition was delivered to him after officials visited the group at Freedom Park.

“The commission will conduct a meeting to discuss the cases and consider which ministry to transfer authority to,” he said.