OSLO (Reuters) – Norway has built the world’s biggest salmon-farming industry. But it wants to go bigger. With their lucrative oil fields now in decline, Norwegians have ambitious plans for aquaculture to power their economy far into the future.

Climate change could make those dreams harder to realize. As waters warm, more salmon farmers may have to move into the country’s Arctic regions to raise the temperature-sensitive species. And there’s another problem. Salmon feed is based on fishmeal, produced by grinding up wild-caught fish. With climate change pushing underwater ecosystems to the breaking point, Big Aquaculture is seeking ways to feed fish that aren’t hostage to increasingly unpredictable oceans.

The Norwegian cities of Bergen and Stavanger have become a Silicon Valley of the Sea as entrepreneurs and scientists look for answers. The innovators hope to find sustainable sources of feed, minimize pollution from fish farms and take new ideas to scale.

“What we’re already seeing in Norway is the impact of climate change on our ecosystems. We have new species entering our ecosystems, we see the warmer waters are challenging to our salmon. But in Norway we have been very lucky because we have a very, very long coastline, so we had opportunities to move our production higher north. A few years ago, perhaps 10 years ago, nobody thought we would be able to produce salmon up in the far north, but now we are actually producing salmon far up in the north as well,” said Tanja Hoel,

Norway’s aquaculture industry will go to great lengths to secure feed for farmed fish. It has even sent factory ships to the other end of the Earth to vacuum krill – tiny crustaceans eaten by penguins and whales – from Antarctic waters. But with climate change breaking down old certainties about patterns of life in the ocean, the industry is searching for new ways to feed salmon without using wild-caught fish.

“It’s not sustainable for the future the way we do it today, by using fish from the sea. So if we can take algae into a land-based system and then produce it, for instance, in a greenhouse, that would be much, much better,” said Svein Nordvik, managing director of CO2Bio.

The Aquafly project at the Institute of Marine Research in Bergen is showing that the fats and proteins produced by insects could be the perfect source of nutrition for the farmed fish destined for dinner plates.

The goal is to reduce the amount of wild-caught fish needed to make fish feed by using ground-up insects instead. Mealworms or black soldier flies can be produced in large quantities by feeding them overlooked resources, notably the seaweed flourishing off Norway’s coast, or food waste such as old pizza crusts. 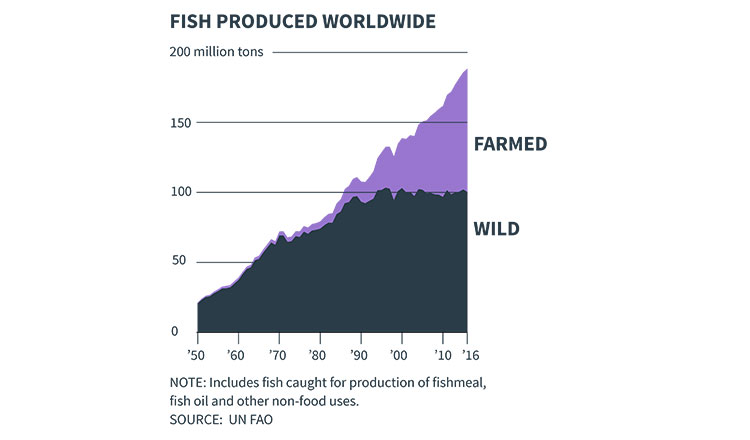 As fish farms grow bigger, they generate growing quantities of fish waste, excess feed, antibiotics and chemicals, which are mostly dumped untreated into the sea. The innovators want to change that. Drawing inspiration from nature and the futuristic technology of space exploration, they hope that the fish farms of the future will help feed a fast-growing human population without undermining the planetary life-support systems that sustain it.

In the Sognefjord in western Norway, fish farmers are pioneering a more environmentally friendly way to raise halibut – by growing them not in cages in the sea, but in tanks on land. Instead of dumping the waste produced by the fish into the fjord, the farmers collect it and turn it into compost.

“We developed our farms together with nature, in harmony with nature. That also goes for the waste that the fish produce: We are collecting it and treating it locally to conserve the nutrients, and to exploit the nutrients in a better way than just to dispose it on a landfill,” said Ole-Kristian Hess-Erga quality and development manager at Glitne.

Norway’s salmon farms dump large quantities of pollution into the sea. By one estimate, the amount of fish waste produced by this country of 5 million people is equivalent to the sewage generated by 17 million people. Inspired by her work on the European Space Agency’s Mars program, Crina Ilea believes she has the answer.

“I think that if this concept will come true, everyone will be able grow salmon in the world – everyone – even in a closed system. Norwegian salmon could be grown in China or another place,” said Crina Ilea senior researcher at Prototech.

The Norwegian cities of Bergen and Stavanger are global hubs for innovation in aquaculture, as startups compete to find ways to reduce the industry’s impact on the world’s increasingly fragile oceans

Small companies are competing to lead the transition into a new era of sustainable fish farming. But their ideas will only make a difference if they’re adopted by bigger players.