Koh Kong protesters back in capital

About 40 people representing hundreds of families locked in a land dispute with the Union Development Group in Koh Kong province attempted to gather in front of Prime Minister Hun Sen’s house and the United Nations office in Phnom Penh yesterday to demand a resoultion.

However, security forces redirected the crowd to Botum Vatey pagoda.

Sang Puy, a family representative, said about 200 families have been locked in the land dispute for years with no solution.

Ms Puy said at this point, the families are hoping to get the attention of Rhona Smith, UN Special Rapporteur on Human Rights in Cambodia, who is in the country meeting with government officials to discuss human rights.

“We would like to ask Samdech Techo Hun Sen and Ms Rhona Smith to help push for a solution to this land dispute,” she said. “It has been ten years and we have been waiting for someone to resolve this case.”

During the gathering, protestors were blocked by security forces in Daun Penh district. The officers demanded the protestors go to the Prime Minister’s Cabinet Office near Botum Vatey pagoda instead.

Pushing and shoving led to three activists being detained by security forces. 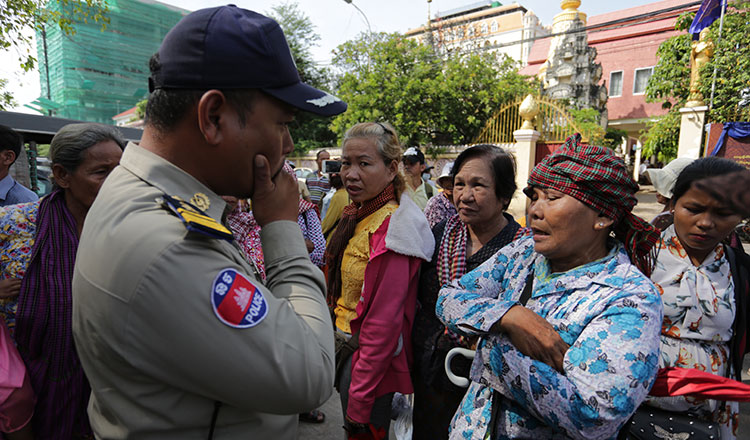 All three were held at the Daun Penh District Hall for about two hours before being released.

A Daun Penh security guard who requested anonymity said the protestors were redirected as security forces were tasked with keeping public order.

“If the people still continue to protest in a public space [such as the park in front of Mr Hun Sen’s house], then it will cause anarchy,” the guard said. “So please go to the Cabinet Office if you want to file a complaint. If you refuse this instruction, the authorities will take [legal action].”

Kong Chamroeun, an official with the Prime Minister’s Cabinet, said that the protestors have gathered multiple times already to submit petitions.

“They have been here three or four times already, they also came here a few days ago to submit their petition,” Mr Chamroeun said. “The Environment Ministry is working to resolve the issue for about 60 families.”