Elephant Valley Project Sanctuary, Mondulkiri province – Im Sophal grabs a large nail file and his elephant Sambo obediently props her foot up on a log, ready for her pedicure.

The 58-year-old elephant rejoices in the compassionate care being provided to her within the Elephant Valley Project Sanctuary in Sen Monorom city, a far cry from her days shouldering tourists around Wat Phnom in Phnom Penh.

Many remember Sambo as the capital’s iconic elephant who gave rides to residents and tourists around Wat Phnom for three decades. In 2014, Sambo arrived here at the sanctuary, where her life within the forest has improved her well-being.

“I have taken care of Sambo for 13 years, starting at Wat Phnom,” Mr Sophal says. “She is better when she walks around in the forest and eats food from the forest.” 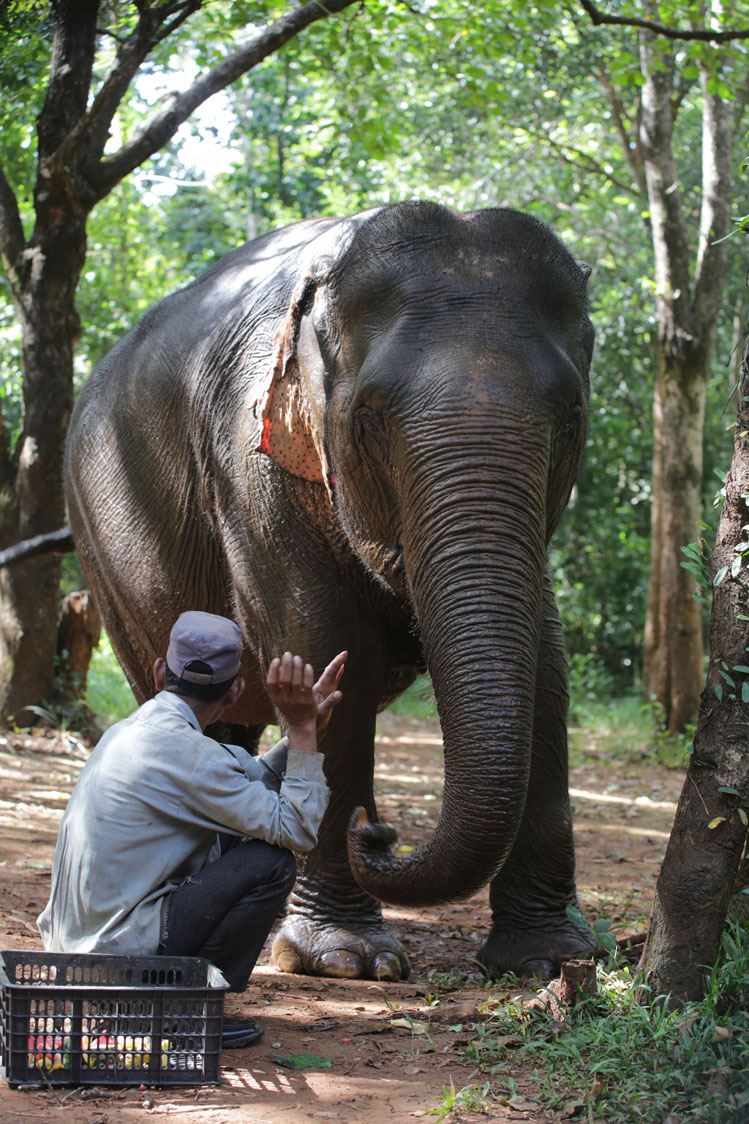 Mr Sophal tends to Sambo’s ailing feet on a daily basis. He says Sambo’s condition is better now than it was when she was working in Phnom Penh, walking endless hours on concrete.

“When elephants are living in their natural habitat, they are happy,” Mr Sophal says, noting that tourists should refrain from riding elephants and instead visit elephants in the forest.

Sambo and nine other elephants like her are given routine medical treatment here due to many years of harsh labour.

Each elephant receives a medical check-up once a week, and is allowed to roam free throughout the wildlife sanctuary to find their own food.

The Elephant Livelihood Initiative Environment is the NGO behind the sanctuary and works to protect elephants and raise awareness of over-working captive elephants.

Jemma Bullock, ELIE programme manager, says there are 70 captive elephants in the Kingdom, noting that 39 are in Mondulkiri province, 18 in Siem Reap province, four in Ratanakkiri province and the rest in Phnom Penh.

Talking in a coffee shop, she says six elephants died last year, and the elephant population is an ageing one because the elephants are too old to give birth.

Ms Bullock says captive elephants working in the tourism sector in Siem Reap and Ratanakkiri are overworked, causing them to die early.

“We appeal to owners to stop letting elephants work too hard,” Ms Bullock says. “We would like to cooperate with them and give advice to them in order to give the best care for captive elephants.”

Ms Bullock says captive elephants need more care than their wild counterparts because many of them are sickly and thin.

“We keep losing a number of elephants because we ask elephants to work too much,” she says.

She says that her organisation focuses on captive elephants by helping elephant owners with medicine, care and providing a resting place for their elephants.

“We do not want to take an elephant if it is already very healthy,” Ms Bullock says. “The elephants can do their traditional work like bring rice from the paddy field back to village.”

ELIE launched its Elephant Valley Project in the province seven years ago and now 1,500 hectares of land is designated as a sanctuary for rescued elephants.

There are ten resident elephants at the sanctuary, including Sambo. They are provided with food, water and a place to rest. A total of 78 families living in a nearby village receive 30 kilograms of rice per month in return for grass, leaves, wild fruit, twigs, shrubs and bamboos to feed to the elephants.

When tourists come, they are required to pay an entrance fee. About half of the proceeds goes to sanctuary operation fees, while the rest goes to rangers and community development initiatives.

Last year, a total of about 2,400 tourists visited the sanctuary, Ms Bullock says. 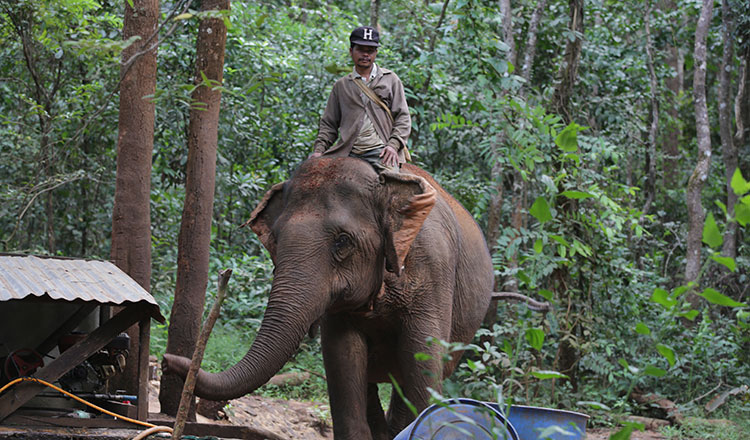 “Now is the time, we have to change the idea so that our children and grandchildren can see elephants on the planet, not just in a zoo,” she adds.

Many elephant owners allow tourists to ride their elephants because the money the owners get is often needed to support their families, she says.

“We have to change the idea for owners, businessmen and tourists, by educating tourists first. We do not want this activity anymore,” Ms Bullock says. “Here, tourists walk with elephants and see elephants in villages.”

“Elephants should be in the forest, living in the wild. They should not be used for business,” Ms Bullock says. “We have some left in the wild and we still have to protect them. If we want to have more elephants, we should protect those in the forest because they can make calves.”

The elephant is an endangered species in the world, and in Cambodia, the number is dwindling.

Today, there are approximately 400 wild elephants in the Kingdom. NGOs are working tirelessly with the government to monitor the elephant population in Cambodia, she says.

She says that the population could be further dwarfed if humans continue to utilise elephants in the tourism industry.

“As humans, do we want to capture animals from the wild just for our entertainment or should we start thinking about the future and look after wild animals in the wild?” Ms Bullock says. “You have to realise why you want elephants in captivity. This is my question to businessmen who want to own an elephant.”

Back at the sanctuary, Sambo finishes her pedicure and walks the sanctuary grounds with Ruby, a 55-year-old elephant not so different from her.

“At first, Sambo had a hard time being around other elephants, but Ruby came along and the two bonded,” Mr Sophal says. “She is happy now.”