Home - The Haunting of Hill House

The Haunting of Hill House

‘The Haunting of Hill House’, Netflix’s latest series based on American author Shirley Jackson’s novel of the same title, is a terrifying gothic ghost story that follows a familiar, already-tested formula that still gives us real chills.

Originally, the book was published in the 1950s and has been used in academic halls over the last decades. Its story has since been made into two movies in 1963 and later in the 90s.

So, what does this new Netflix adaptation have to offer? I was at first a bit skeptical to watch the series as it may only shrink the glory that Jackson’s masterpiece has enjoyed since its publication. However, the literary genius of horror himself, Stephen King, praised the series as near perfect. How can I not check it out?

While the book takes the central plot revolving around a paranormal investigator who decides to check on a haunted home, Netflix’s new offering – adapted by Mike Flanagan – centers around a family whose lives are affected by traumatic experiences in the haunted house – an unfaithful diversion from its source.

It’s hard to recall all the horror films released over the years and find the ones that have truly exceled – those that didn’t rely on cheesy lines or dying whatevers.

However, there was a time when horror had more of a purpose that just purely frightening its viewers. Horror stories – books, films and series – used to help delve deep into the human psyche. Movies such as ‘The Shining’ and ‘Halloween’ were created with this very standard.

Both of these classic films focused on the family elements of horror and how the reality of life can sometimes be plagued by supernatural elements that can introduce a new meaning to the word fear.

Fear created by everyday life or interactions with the family is the true starting point of Netflix’s ‘The Haunting of Hill House’.

‘The Haunting of Hill House’ is my kind of horror; it’s suspenseful, thrilling and psychologically terrifying. Nothing feels cheap and the horror slowly builds up throughout the series. The thing that could make this series another classic is it’s not just about scaring you, but about exploring themes such as grief, a broken home, infidelity, addiction and other earthly emotions common to us all.

The props and cinemato-graphy were central to making things feel real; never making any haunted scene too over-the-top. The long pan shots really put the viewer on edge.

The viewer is quickly introduced to the Crain family, who has taken over the infamous Hill House in the early 1990s with aspirations of flipping the house and using the money earned towards building their dream home.

Husband and father Hugh Crain (Henry Thomas) is a sincere, compassionate figure in the family’s life, the kind of dad who won’t ever shy away from making a pass at trying to fix anything and everything if it means making his family’s life better. Olivia Crain (Carla Gugino) is an affectionate, free-spirited mother and wife, the driving force of the large family. The couple has five children.

The story is told in two time periods and is not in chronological order. Instead, each episode shows the prospect of one family member from the past to the present time. We get the set up of when the family lived together for a short time in Hill House in the past, and we see the kids already grown up in modern day.

From the first introduction of their adult selves, it’s clear that damage has been done to this family dynamic, and there are varying stress and issues with them all.

Steven (Michael Huisman), the show’s protagonist, has kick-started a career as a horror writer, using his experiences from his past to inspire his novels. This has put him at odds with his family, as they feel he has exploited their family’s trauma and heart break for fame and money.

Shirley (Elizabeth Reaser) owns and operates a funeral home that is finically struggling.

Theo (Kate Siegel) has achieved getting her PhD in Psychology, and feels like somewhat of a misfit, with her inability to form deep connections, perhaps out of fear.

The twins Luke (Julian Hilliard/Oliver Jackson-Cohen) and Nell (Violet McGraw/Victoria Pedretti) seem almost like separate entities from the rest of the siblings. Luke is the most troubled one, as he has been committed to drug rehab on a number of occasions for his struggle with heroin. Everyone in the family has given up on Luke, except for Nell, who tries to kill herself. This traumatic circumstance brings the family together to finally confront some of their unresolved childhood traumas. The twins have specific memories of a ghost that has haunted them up to this day.

What exactly happened the night their dad rushed them all out of the house while their mother possibly killed herself? This plays a central theme through most of the episodes, as some of the adult children believe their dad had created lies by crafting haunting stories. The children just want to know the answers that their father has been keeping from them for years. What is he trying to protect?

As the viewer is transported back and forth in time, it becomes clear that something about this house has its own life. One room in particular holds the key to unmasking the truth. This room is the ‘red door’ room which cannot be opened. Is there something hidden in this house? Or, are all of the horrors the family experienced just products of delusion? You decide. 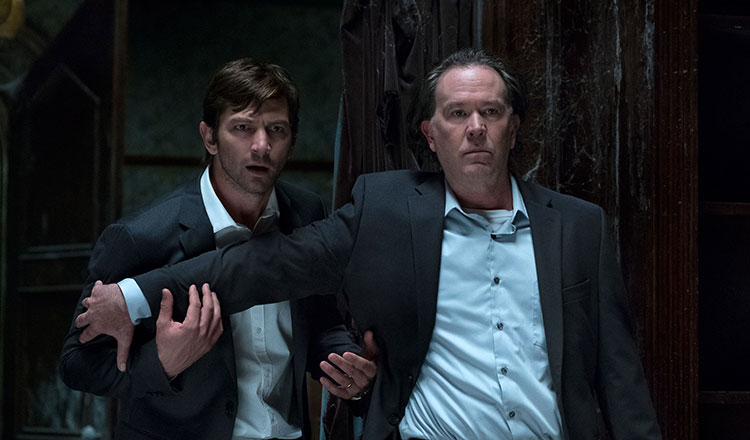 “No live organism can continue to exist sanely under conditions of absolute reality; even larks and katydids are supposed, by some, to dream. Hill House, not sane, stood by itself against its hills, holding darkness within; it had stood for a hundred years before my family moved in and might stand a hundred more. Within, walls continued upright, bricks met neatly, floors were firm, silence lay steadily against the wood and stone of Hill House, and whatever walked there, walked alone,” wrote Shirley Jackson in the original book.

Looking for a November thriller to binge watch? Gear up for the full moon and Halloween with Netflix’s ‘The Haunting of Hill House’. Get ready to be scared.

The karma of meat-eating